Augusta BOS: "Be careful how you speak out against our decisions" 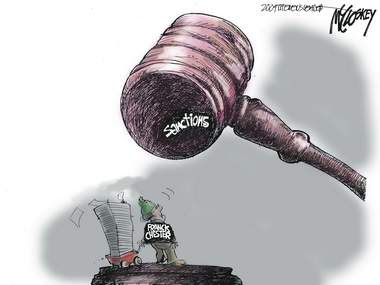 In exercising his First Amendment right and representing over 10,500 citizens against the County of Augusta, the board of supervisors, and commissioner of the revenue Jean Shrewsbury, Mr. Chester has been smacked up side the head by Augusta County government with a lawsuit asking for financial sanctions against him for having the audacity to question his public officials.

Today's Staunton News Leader editorial, appropriately named "The fly and the hatchet," illustrates the reality of the little guy going up against City Hall when City Hall has unlimited taxpayer funds to fight against the very taxpayer who dares to question the public servants he voted into office.

An irritating little fly has landed at the Augusta County Government Center. It's notification of a lawsuit filed in circuit court claiming the Board of Supervisors erroneously assessed real estate values in the most recent reassessment.
...
The county in turn asked its lawyer to file a motion asking the judge not only to dismiss Chester's lawsuit — it's frivolous, after all, because there's no such thing as a class action lawsuit in Virginia — but they also asked the judge to sanction Chester for filing it. In other words, ask for attorney's fees and related charges.

In doing so, the county has raised a hatchet to kill the irritating little fly.
...
In asking that Chester, a county resident and a spokesman for thousands of residents angry about what they saw as unfair property assessments, be sanctioned, the supervisors are sending a clear message — be careful how you speak out against our decisions. [Emphasis added]

County attorney Pat Morgan admitted to News Leader reporter Trevor Brown that this action is extremely unusual ... but the county is going through with it anyway:

"It is kind of an unusual procedure," Morgan said of his decision to move for the sanction, "but I did not file it on behalf of the defendants lightly."

Rather than asking for sanctions against Chester, the supervisors need to let it go. Let the case go before the judge and let justice rule. No need for a hatchet, no need for recrimination. No need to send the message that disagreement will not be tolerated.

This time when the supervisors picked up the hatchet to kill the irritating little fly, they didn't realize the fly had landed on their own forehead. [Emphasis added]

Because of their actions, the Augusta Board of Supervisors has come across as extremely arrogant to the citizens they were elected to represent.

The county has indicated it wants all 10,500 cases be tried individually in the court system. The court filing fees alone for that many cases would equal almost $1 million, and the sheer number of cases could tie up the court for years, something Mr. Chester was trying to avoid to save taxpayer money and time.

Augusta is a microcosm of the larger taxpayer unrest going on nationwide as manifested by the tea party events and the 9/12 March on Washington three weeks ago. As pointed out in this editorial, the supervisors have little interest in working with the "little people."