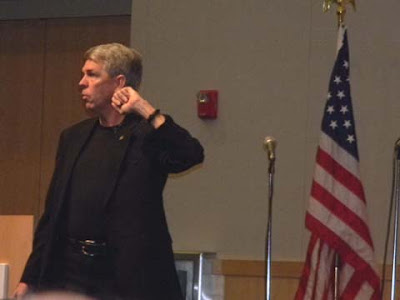 "I am grateful to Almighty God for the blessings which, through Jesus Christ Our Lord, He had conferred on my beloved country...." - Charles Carroll, last surviving signer of the Declaration of Independence


David Barton is one of the premiere historians on American history, someone who tirelessly travels the country educating Americans about our Christian heritage against a negative sea of liberal misinformation. Through his website, Wallbuilders, he provides the tools necessary to learn, and his materials were part of my home school curriculum over the years.

Monday night Valley folks were fortunate to have him as the keynote speaker for the annual Valley Family Forum dinner in Harrisonburg, an event that sold out more than a month ago. The reason it was sold out was simple: David Barton knows his history and he has an entertaining way of passing it along to his audiences.

A regular on the home school circuit over the years, he has now become a regular on Glenn Beck's Fox News television show, appearing weekly for the Friday "Founding Fathers" series. He is able to offer his expertise as well as provide artifact books and documents that he has collected over the years.

On one recent Glenn Beck show, Mr. Barton had the first Bible printed in the United States ... a Bible printed by the U.S. Congress for use in the schools.

Yep ... a Bible printed by the government to be used in the schools. Responding is what Mr. Barton does best as he provides rebuttal to the liberal pablum that is dished out on a daily basis from the public schools to higher education to the mainstream media and, now, the current White House administration.

With a power point presentation providing insight into documents, pictures and information about the Founders, and quotations from many Declaration of Independence signers as well as a number of not-so-famous ones, the 45-minute talk seemed more like 10 minutes.

David Barton provided enough information in that 45 minutes to write 10 posts about his talk. The crowd was captivated and left wanting more after it was over.


Many folks were there. Besides Dean and Janet Welty, others included Sen. Mark Obenshain and his wife Suzanne, Sen. Emmett Hanger, Chaz Evans-Haywood, Marsha Garst, Lowell Barb, Steve Waters, Del. Bob Marshall, Victoria Cobb from the Family Foundation, Larry Roller, Luis Padilla, David and Sherry Huffman, Tommy and Donna Moser, Tony Wilt, Greg the Fifer, "George Washington," and many others. The delegates, usually in attendance, were at a House of Delegates retreat.

At our two tables were friends Suzanne Curran (portraying Mrs. Mullenburg), Frank and Nancy Summers, my neighbors Richard and Ellen, Tara Bowman, SWAC Husband, and some of those from our ladies conservative book club including Debbie Summers, Peggy Bell and her husband Don, Marcia and Dave, Ginger, and Debbie Harper.