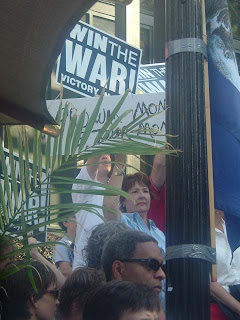 Trixie Averill stood in 2007 against anti-war protester Cindy Sheehan in Charlottesville. Trixie, a military mom whose son Sgt. Marcus Averill was deployed 3 times to Iraq and once to Afghanistan, rallied with others in support of America's troops. Trixie's sign says, "3 Tour Military Mom." This is my favorite photo of her. It shows she has been boots-on-the-ground throughout the years and not just at political rallies.

Trixie Averill is the real deal, someone who has been in the trenches for 30 years working for conservative causes, principles, and candidates, crisscrossing the Commonwealth and especially the 6th District to do so. She has campaigned for everyone from George Allen to Jim Gilmore to Bob Goodlatte to Bob McDonnell, Bill Bolling, and Ken Cuccinelli.

Trixie has been endorsed by Gov. Bob McDonnell, Lt. Gov. Bill Bolling, and Rep. Bob Goodlatte as she runs for Chairman of the 6th District at this weekend's convention in Lynchburg.

Anyone who knows her knows an animated, upbeat, and patriotic military mom whose energy rallies others to work their hardest for our candidates. Recently, while speaking at the Rockingham County mass meeting, she read the duties of a District Chairman from the Republican Party of Virginia Party Plan and emphasized that a chairman does the business of the Party by supporting Republican candidates and the Reublican Platform.

From Article IV, Section D of the Party Plan - Duties of a chairman:

b. He shall issue calls for District Conventions and Party Canvasses, and shall preside until a temporary organization is effected. See Article VIII, Section A.

c. He shall convene the District Committee when the needs of the Party so demand, but in no event less than once during each calendar quarter, with no more than four (4) months between each meeting, and shall preside at the meetings of the Committee. He shall be responsible for sending written notice of the call for a Committee meeting to all members of the Committee,which shall include the agenda for the meeting.

d. He shall be responsible for the operation of the District Headquarters, hiring such personnel as he shall deem necessary and for which funds are budgeted and shall be accountable therefor to the District Committee.

e. He shall be responsible for providing a prescribed time and place, which shall be supervised by the District Chairman, or a designated representative, for filing such declaration of candidacy and petitions as may be required by state law of a candidate in any primary election.

The 6th District has had its share of issues the past two years and Trixie will be ready to step in and mediate where necessary. Her grassroots activism goes back 30 years and she was voted by her peers onto State Central Committee and then, in 2009, as Western Vice Chairwoman.

A brief outline of Trixie's conservative work throughout the years:

Now, after 16 years of traveling the West, I’d like to focus right here in my home district. The political landscape has changed and we can no longer assume that the 6th will go red, just because it always has. I do believe that we can still win and win big, but we have to buckle down, work together, and stay focused on the goal.