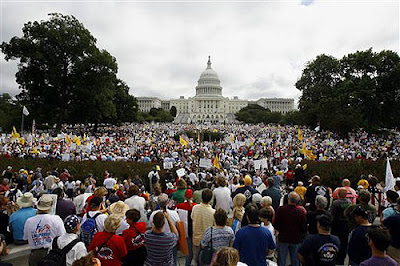 The photos of 1.2 million Americans marching on Washington, DC, are a reminder that we are in this battle together. ObamaCare, Stimulus, overreaching government at record-breaking speed ... all propelled hundreds of thousands to drop everything and head to DC to voice their objections.

We took six buses from the Shenandoah Valley. People were eager to be included. They brought signs, wore patriotic clothings, and carried American and Don't Tread On Me flags. We walked down Pennsylvania Avenue to the Capitol. Everyone was cheerful, upbeat, polite ... standing in the midst of so many in front of the U.S. Capitol was like standing in the midst of friends.

Speakers, cheers, chants ... everyone spoke up. It lasted several hours.

When it was over, as the Shenandoah Valley group gathered across the street from the Capitol, we looked back at the grounds where 1.2 million had just been ... and there was no trash. No trash. These were responsible Americans. They work hard, they saved for retirement, and they picked up their own trash behind themselves.

Email ThisBlogThis!Share to TwitterShare to FacebookShare to Pinterest
Labels: 9/12, march on Capitol Hill

And yet the teaparties in the 5th District remain hopelessly divided, accomplishing nothing.