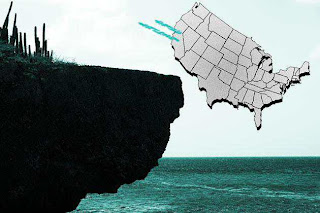 The 2012 end-of-year holidays were dominated with talk of the fiscal cliff facing America. As members of Congress worked late into the night, took a brief break for Christmas, then returned to D.C. to continue talks, Americans talked. When it was all said and done, some were happy and some were not.


THE GOOD NEWS AND THE BAD NEWS ABOUT THE FISCAL CLIFF: The big fiscal cliff winner was George W. Bush. For a decade liberals ridiculed his economic policies and blamed his 2001 and 2003 tax cuts for the 2008 global recession.

THE BAD NEWS is that the Biden/McConnell compromise has solved little and has made the situation worse. This is clearly no solution to our economic problems, and the Congressional Budget Office says it will add $4 trillion to the deficit over 10 years.

Everyone is describing the new top federal tax rate as 39.6%. However, with the addition of Obamacare, the Medicare tax hike and the new phase out of charity and mortgage deductions, it will be 45%.

Bottom line: we have a spending problem. We cannot keep piling up debt forever and expect the rich to keep bailing us out. Do we really want to become like tax-the-rich Europe? Do we want to advance class warfare? Wake up, America.
Posted by Lynn R. Mitchell at 1/02/2013 10:48:00 AM