Snow watch in the Shenandoah Valley 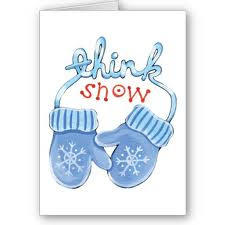 I must point out that it's now 1:00 in the afternoon and, though it's gray and dreary outside, not a flake of snow has been seen in my corner of Augusta County. We are on snow watch because the forecasters began sending out the alert yesterday that substantial snow could be heading our way.

Early forecasts suggested it would begin mid-morning. There was nothing but some light rain showers were seen, and the temperature when I woke was 40 degrees. Not exactly snow temps. It later dropped to 38 degrees but then popped back up to 40 as I left the house to head into Staunton.

Temperatures in Staunton were a bit warmer with a little heavier drizzle of rain. Traffic was busy and at first I couldn't figure out why there were so many cars on the streets. Then it hit me. Oh, that's right -- snow's in the forecast. Since my business in the city had nothing to do with snow, I had forgotten others may need to pick up a few supplies before being confined for the white stuff.

At one point the rain in Staunton was mixed with sleet and I watched little pellets of ice bounce on my car windshield and the temperature drop to 39. Oh good, I thought, it's beginning.

Nope. That rain soon ended as I headed to Verona and the temperature rose to 41. Hmm. Mother Nature, I concluded, was yanking our chains. By the time I made my way back home, it was 40, dry, gray, and did not feel particularly cold outside. Gazing over the distant mountains, it looked like snow -- gray, hazy, dark. But there wasn't that usual feel of snow -- cold, damp, raw.

Now as I look out the window at a little past 1:00 with the Weather Channel blah-blah-blahing in the background, it's 39 degrees and still gray but still nothing.

Many local schools dismissed at 1:00. It's seems to be getting more overcast but, peering out the window trying to conjure up a snowflake, there's nothing, not even a rain drop.

So I'm on snow watch, anxiously waiting for snow to begin. Stay tuned with me....

1:30 pm: The snow just began! I was outside taking "before-the-snow" photos when the first flakes began falling. Let it snow!

1:50 pm: It continues snowing at a steady rate although nothing is sticking yet. Temp has dropped to 37....

2:15 pm: Temperature is quickly dropping and is now 36 with a slight breeze and steady snow. I turned on the outside snow lights and ... brrr ... it's definitely cold....

4:15 pm: Started back up and is steady again. Hope it starts accumulating soon.

SWAC Daughter, who lives in Charlotte, found a snow photo of mine posted at Country KCY radio (below) with the question, "Anyone in the Valley seeing snow?" Love that they liked my photo of our yard during the March 2011 snow. 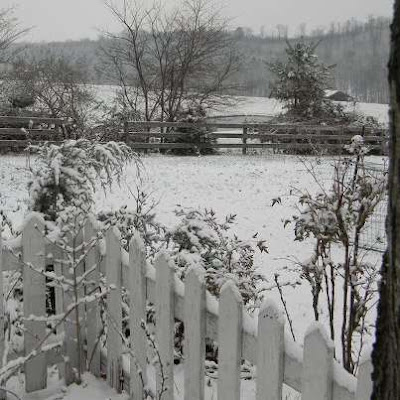 4:50 pm: Snow is now sticking to the grass and deck ... coming down heavy, and the temperature has dropped to 33.  The National Weather Service has Augusta and Highland counties under a winter storm warning until 11:00 tonight with total accumulation predictions of 4-6". Let it snow!
Posted by Lynn R. Mitchell at 1/17/2013 01:20:00 PM