Snow expected over much of Virginia Thursday 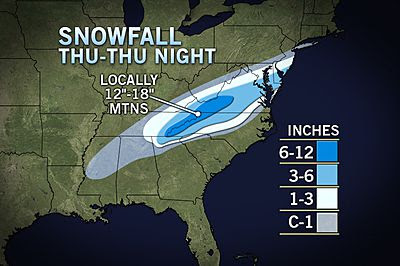 As you head north the snow will become more extensive, lower in elevation and will reach east of the Appalachians. The mountains of North Carolina to southwestern Virginia could be on the receiving end of a foot of snow or more.

In Virginia, a swath of heavy snow may extend northeastward from the mountains to part of the Tidewater. Several inches of snow are possible for a large part of the Delmarva Peninsula and part of southern New Jersey.

Moderate snow could reach as far north as the Washington, D.C. and Baltimore areas. These cities will be on the northern edge of the accumulating snow.

"Cities that have the potential to receive several inches of snow include Knoxville and Bristol, Tenn., Asheville and Winston-Salem, N.C., Roanoke and Richmond, Va.," Mancuso added.

Raleigh-Durham and Charlotte, N.C. could receive an inch or so of snow.

Due to the recent warm weather, much of the snow will melt on roadways. However, where the snow comes down hard, over the bridges and overpasses and over the higher elevations, slippery travel is likely.

More details and maps on the southern snowstorm will be released by AccuWeather.com as they become available.

Prior to the snow or a wintry mix, additional heavy rain and incidents of flooding will continue to be centered over the southern Appalachians, but will reach westward and eastward to the foothills and beyond.
Posted by Lynn R. Mitchell at 1/16/2013 02:00:00 PM