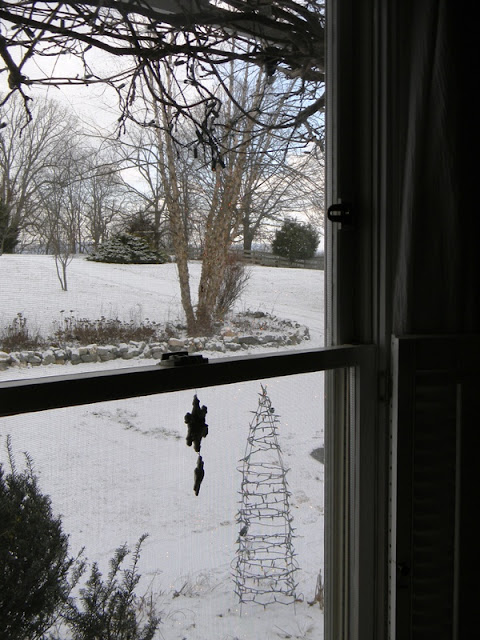 Looking out the window after Wednesday night's surprise snowfall.

Baby, it's cold outside. Our corner of Augusta County has not been above freezing most of the week, even dropping down to 6 degrees one night. Now that's cold. Last night it was 8 degrees before beginning its upward trek on the thermometer for the day.

The high today: 22 degrees. By 12:30, it began to snow. And it snowed and snowed and snowed ... tiny little fine flakes that blew horizonally across the yard and sifted down into the grass, at times almost whiting out the view between the house and the woods on the ridge behind us. Occasionally it would let up, and then the next time I looked out the window, it would be blowing sideways in heavy gale-like style once again. 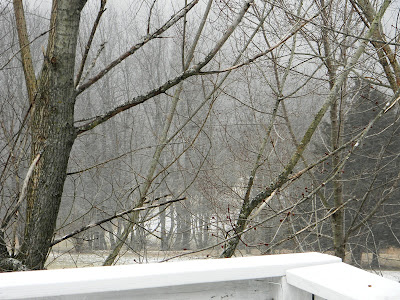 Snowy scene across the back yard to the ridge behind the house. The snow, flying horizontally, was beautiful as it came down.

The temperature dropped into the teens when the snow began and that's where it still sits as the wood stove blasts out heat to try and keep the cold at bay. We had planned to gather with homeschool friends for dinner tonight but it was postponed when the snow continued, probably a good thing considering that all surfaces quickly filled in around what was left of Wednesday night's snow.

On Friday the bluebirds were happy to visit the freezerless bird bath that sits on our deck and offers entertainment for us from the many birds who visit at this time of year. Everything else has been frozen over all week so it has been a busy place. 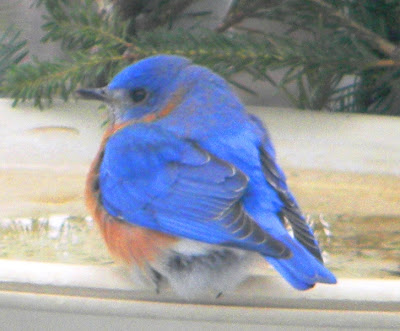 It snowed on and off all afternoon. Anyone who knows me knows how much I love snow. Years ago while still in Richmond, when I lived next door to my mother-in-law, the first flake would bring a phone call form her and she would always say, "Stick your head out the door and I'll throw a snowball at you!"

Friends over the years have graced me with snowmen of every shape and form. Snow, snowmen, sledding, ice skating, skiing -- I should have been from a snowier place. Trivia: Did you hear that, in Vienna, Austria, they have a two-acre ice skating rink? Two acres! I cannot even imagine having that much space to spirl and twirl and glide, not that I do it anymore. I value my in-tact bones too much to ever get back on ice skates.

And so we are snugly secure in our corner of Augusta County, feet propped up with the fleece throw that Mom made for me for Christmas -- thanks, Mom! -- thrown across my legs, and the laptop propped in my lap as I correspond with SWAC Daughter in Charlotte where they have been dealing with ice and freezing rain most of the day.

I enjoy today's technology -- Facebook, texting, email. Years ago when I first moved to North Carolina, pregnant with my first child and away from family and friends for the first time ever, there was no technology to keep in touch with those I had left behind in Richmond. Long distance calling was very expensive and so it was a rare occurrence. I turned to letter writing. My step-dad joked that I wrote epistles, long descriptive pages of my days alone on the farm with a new baby, perhaps a hint of what was to come when technology caught up and I would eventually end up with a blog.

When we bought an electric typewriter -- the very latest model that was auto-correcting -- it made my correspondence easier and gave my cramped hand a break. That was followed by our very first computer, bought in Hickory, and carried home, carefully unpacked, and set up on my desk. It was a glorified word processor because I used it in my job as newsletter editor for the local homeschool group. We had a dial-up connection which, again, entailed long distance calling, so I didn't go online very often. I could have sent emails but not many people had computers or emails at that time.

So I used the word processor to continue to type letters. And I continued to be horribly homesick and alone on a farm in the middle of rural North Carolina while SWAC Husband drove to work in Charlotte.

Now with SWAC Daughter back in the place that we left many years ago to come back home to Virginia, communication is much easier and the distance is not so oppressive. When the need for personal interaction becomes overwhelming, one of us gets into our car and starts the four-and-a-half-hour drive to see the other.

Even now as I write, I remember how it was before there was a blogosphere where millions now find themselves with a voice on a myriad of subjects. I found my way to the blogosphere in 2006. Over the years, I have combined my writing with photographing the beautiful Shenandoah Valley and beyond, often posting photos of the roads I have traveled and the historical sites I have visited as seen through my window on the world.

Enjoy the snow in your part of the world, stay warm, and enjoy your Friday night. I know I am.... 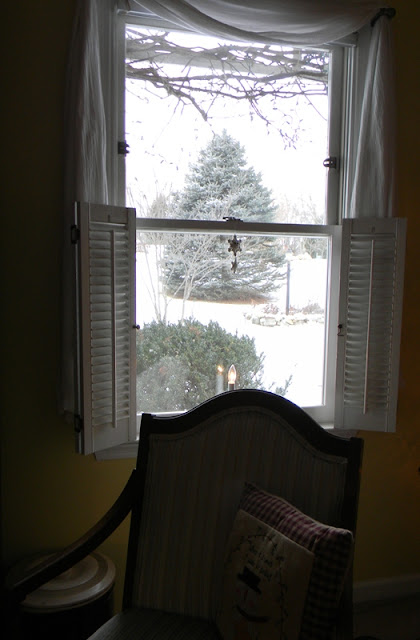