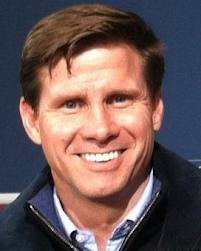 [Pete Snyder is one of the 2013 Virginia Lieutenant Governor candidates. He recently took a break during his campaign due to some health issues concerning his mom and, today, he sent a heartfelt letter explaining that she had been diagnosed with breast cancer and was seriously ill. Here is his letter.]

Many of you are aware that I had to step off the campaign trail for a few days over the past week or so - as I learned my Mom had been rushed to the hospital. I'm so grateful to so many of you who have offered your thoughts and prayers. We need them more than ever. The past 10 days have been some of the roughest we as a family have ever faced.

Here is what we know: Our worst fears were realized. Mom has advanced breast cancer, which is going to take chemotherapy, a double mastectomy, and radiation.

Over the past two weeks, as we huddled by her side, Mom told my sister and me that beyond beating this wretched disease, she has two short-term goals: One, that when she is healthy enough, we, as a family, have a picnic on the beach. And, two, that she be strong enough to be by my side on the floor of the Coliseum in Richmond on May 18th for the RPV Convention.

The family beach picnic, I expected.  That's what she loves to do - and trust me, she was very specific about the menu, as only Moms can be.

The convention thing was a surprise to me.  While Mom's a good conservative and an avid (if not rabid) Fox News viewer, never in a million years did I expect a political campaign to be top of mind for her.

Like all of you, in my book, family trumps politics - any day of the week.  But Mom said that she didn't raise a quitter, she raised us to aim high and to fight with everything we have. She wants me to run and run hard just as she taught us to do everything in life.  And she's going to be doing the same.

I don't know what the coming weeks and months are going to look like - but I imagine our already "unconventional" convention campaign may from time to time be even a bit more unconventional.  And that's ok by me.  I'm going to need to be by Mom's side often.

Mom's a fighter, and if she's fighting towards those two goals, I'll be doing the same. Please keep the prayers for her coming in the days, weeks and months ahead. Thank you for understanding.