Lance Armstrong & the Oprah interview: Can he be forgiven? 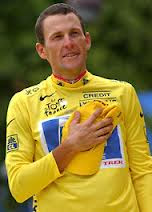 It has been a rough year for cycling star Lance Armstrong who has fallen from glory in the eyes of the world.  In the face of doping charges and other accusations, USA Today asked, "Can you forgive Lance Armstrong?"

To be perfectly honest, Lance Armstrong was the reason I watched the Tour de France and other cycling events throughout the years.

His story was compelling. His history of overcoming cancer was inspirational and had as much to do with my becoming a fan as his ability to take on the overwhelmingly brutal, body-punishing mountains of Europe. Who in their right mind, after all, would cycle 2,000 miles on a bicycle through the French Alps? Lance Armstrong not only did it but won the Tour de France a record-breaking seven times, and I sat in front of the TV and cheered our American team with everyone else. His bright yellow jersey inspired the nation.

In 1996 at the age of 25, he was diagnosed with stage three testicular cancer that had spread to his brain, abdomen, and lungs. He beat it even though he was given less than a 40 percent chance of survival, and we all cheered his comeback.

The forty-one-year-old was and is one of the most talented athletes during my lifetime. I admired his tenacity, his work ethic to go the extra mile, and the don't-give-up attitude -- perhaps partly driven by his near-death cancer experience -- that inspired others to believe they could achieve more because he had done so. He had been a competitor before cancer, he said, but not a fierce competitor. Cancer made him fierce.

Some athletes who push themselves have various qualities that define them: tenacious, driven, arrogance, bullying, ruthless. In Thursday's interview with Oprah Winfrey, Armstrong basically admitted to all that, and more.

We should never lose sight, however, that he has also proven to be a compassionate, giving humanitarian, creating Livestrong Foundation in 1997, and helping raise over $500 million for an organization that unites, inspires, and empowers people affected by cancer. Over 80 million bright yellow Livestrong wristbands have been sold ... 80 million. That's a lot of wristbands.

Sadly, Armstrong has stepped away from Livestrong, at their request, to avoid tainting it with the controversy surrounding him but, in my opinion, it would be a mistake if that group does not pull him back in to continue the work he began as a cancer survivor.

His philanthropy has not been limited to Livestrong. In 2011, he cycled with fellow Texan and former President George W. Bush and a group of Wounded Warriors, American servicemen who had lost limbs in Operation Iraqi Freedom and Operation Enduring Freedom (Afghanistan). Armstrong has also contributed to at least a dozen other charity organizations throughout the years.

Curiosity drove me to tune into the hyped no-holds-barred television interview with Oprah Winfrey that was to be an honest, candid, truthful admission from Armstrong. How would he act? Would his body language betray his words? How would someone who was so in control of his life react to being asked blunt, intrusive questions? I watched Part 1 not once, but twice since Oprah kindly reran the interview immediately following the first airing, and then tuned in for Part 2 the following night.

Forgive me but I have difficulty excoriating the guy, and here's why. I don't think he was the only one doing it. Does that make it right? Of course not. He broke trust with people who believed in him and may now feel like fools. He lied under oath, denied acccusations made against him, and turned on friends and team mates who had earlier exposed him.

Those are not admirable qualities. However, from a realistic viewpoint, one has to wonder if doping was a means of leveling the playing field in a highly demanding sport if other cyclists from around the world were doing it. It is a reminder of earlier Olympics and the competitors from Eastern Block countries who were beefed up and consistently won over U.S. and European competitors.

One of my friends added another perspective. "Think of all the riders," he said, "who would have won and gone on to have endorsements and now they are too old to regain that part of their lives."

Armstrong found himself on Oprah because his carefully built house of cards collapsed. Writing in Wired, Brian Alexander suggested there may be a witch hunt for cheating cyclists, and raised very pertinent questions about the "doping police" and what it may mean to cyclists and other athletes as authorities go after the big fish by breaking down those around them. Alexander wrote:


In an eerie echo of the tactics used by the American House Un-American Activities Committee during the Red Scare days, the Australian agency issued a call this past November “to anyone involved with, or has information about, doping activity in the sport of cycling to come forward and talk before someone else accuses them of doping.” If you talk first, you can get credit for snitching. If you wait, well, who knows what somebody else might say about you?

In the Winfrey interview, Armstrong refused to finger anyone else in doping or participating or knowing. He made it a point that he was wholly responsible for himself, and only himself.

There's still more to develop as the dominoes fall ... one admission will open up questions about another event as dots are connected. There are people who are owed apologies, Armstrong admitted.

"I deserve to be punished," he told Winfrey. "I'm not sure I deserve a death penalty."

That, to me, is the crux of this entire issue. The frenzied chase after Armstrong is a familiar desire to tear down our heroes and rip them to shreds. He deserves a chance to repair his reputation.

So to answer USA Today's question of whether to forgive Lance Armstrong, my response would be an overwhelming "yes." He may have stumbled but the good he has accomplished in his life far outweighs any shortcomings. Just ask the millions affected by cancer who have benefited from the Livestrong Foundation.

For another perspective, read the thoughtful post about Armstrong from Bearing Drift colleague Mike Fletcher who is also a cancer survivor.
Posted by Lynn R. Mitchell at 1/22/2013 08:54:00 AM