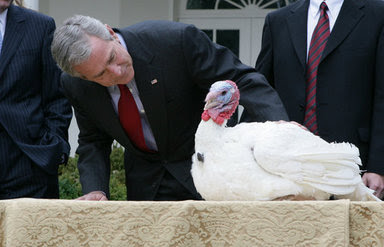 President George W. Bush offers an official pardon to May, the 2007 Thanksgiving Turkey, during festivities Tuesday, Nov. 20, 2007, in the Rose Garden of the White House. In pardoning May, and the alternate, Flower, the President said, "May they live the rest of their lives in blissful gobbling. And may all Americans enjoy a holiday full of love and peace. God bless you all." (White House photo by Chris Greenberg)

The presentation at times has brushed against broader history. For example, the November 1963 event was one of President Kennedy's last in the Rose Garden. The first President Bush conducted the 1990 ceremony just before leaving for Thanksgiving with the troops in the Persian Gulf region. President Clinton in 1996 returned from an Asian summit and literally went directly to the ceremony.

The 2007 National Thanksgiving Turkey and its alternate are from Dubois, Indiana and were raised under the direction of National Turkey Federation Chairman Ted Seger. The 21-week old turkey, will weigh about 45 pounds, when he is driven to Washington.

The National Thanksgiving Turkey was raised using normal feeding and other production techniques. The one exception is they were provided increased interaction with people so that they would be prepared for their role at the White House Ceremony.

Presidents traditionally have granted the National Thanksgiving Turkey a "pardon". After the presentation, the turkey will be flown first class to Disney World in Orlando, where he will be the grand marshal of “Disney’s Thanksgiving Day Parade.” After the parade, guests will be able to visit the bird in the backyard of Mickey’s Country House in Magic Kingdom Park.
Posted by Lynn R. Mitchell at 11/21/2007 11:46:00 PM