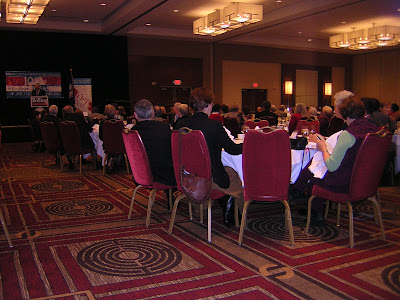 Virginia Republican leadership was well represented at a breakfast that was hosted by Lt. Governor Bill Bolling and attended by Attorney General Bob McDonnell, Chairman John Hager, Congresswoman Thelma Drake, and others.

Bill Bolling delivered his usual booming "Good morning!" That man can rally a crowd! He talked about staying with our Republican conservatives principles and said we must pull back the curtain on Mark Warner in the upcoming senate race. Mark Warner, the governor who was responsible for the largest tax increase in Virginia history when a tax increase was not necessary ... the governor who made a solemn vow while running for governor that he would not raise taxes. That and more needs to be exposed about him. Lt. Governor Bolling said we must focus on the 2008 presidential election and work hard to keep our red state "red."

Chairman John Hager said we cannot dwell on our losses but must look ahead to build the Party and bring us together as we elect our candidates. He then announced the grassroots awards for best Unit and best Volunteer from each of the eleven congressional districts. In the 6th District Shenandoah County was the best Unit and Max Baer was Outstanding Volunteer.

All those attending breakfast received a pewter Christmas ornament from Bill Bolling, a tradition that was started three years ago. It commemorates Virginia's 400th anniversary celebration of Jamestown as the first English settlement in America.