Americans For Prosperity: Day at the Capitol 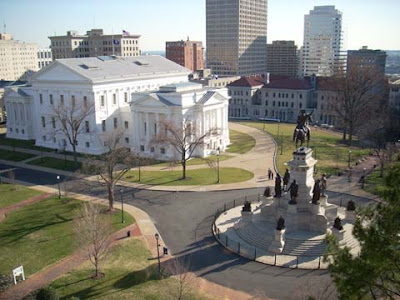 The stately Virginia State Capitol with business skyline in the background. 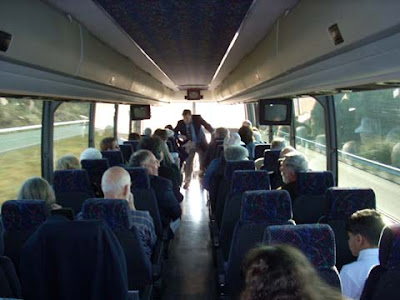 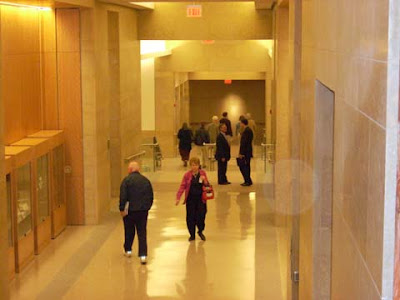 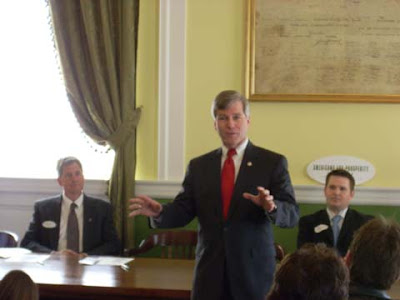 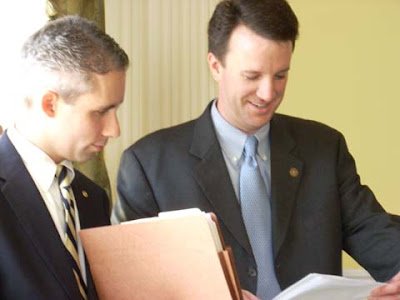 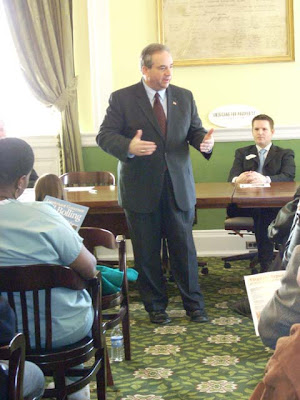 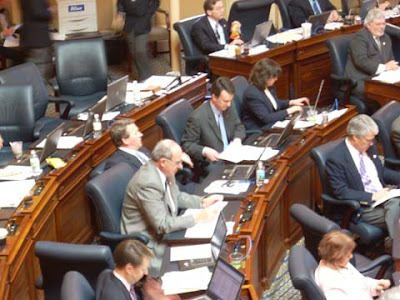 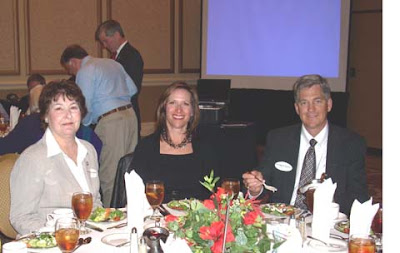 AFP luncheon at the Omni.

On a beautiful spring-like day in Richmond, Thursday's Americans For Prosperity Day at the Capitol was a great success as proponents of lower taxes and responsible spending spent the day meeting with their legislators, watching the budget process, and listening to elected officials emphasize the importance of leaving more money in the pockets of taxpayers.

The bus ride offered Valley citizens an opportunity to visit with others from nearby localities and to discuss the state budget, various bills that had been passed and vetoed, and generally enjoy the company of like-minded folks.

A friend's home school family with six children conducted school on the ride over with each child, ranging from grades 2-9, working on math and then civics. They were perfect passengers and a joy to be with throughout the day.

Afterwards, with the House in recess, we were allowed to enter the chamber and sit in the delegate chairs. I had the great honor of sitting at my delegate's desk, Chris Saxman, and made sure to leave him a note saying, "Lynn was here and enjoyed your chair!" Ben Cline and Ken Cuccinelli talked with us until Senator Cuccinelli had to head over to the Senate Chamber.

Sitting in the gallery of the Senate offered the opportunity to see them honor and pass a resolution for a Chesapeake-area police officer who was recently killed in the line of duty. There was reverence as his widow approached the dais and was hugged by Senate President Bill Bolling.

Observing the House of Delegates from the gallery was fun as we watched Delegates Chris Saxman and Ben Cline conferring with each other, and as Delegate Saxman took to the floor to press his issues. Afterwards, we spoke with them in the hallway when they went into a brief recess.

Everyone was ready for lunch at the Omni at 1:30 where we were treated to a formal meal of garden salad, chicken cordon bleu, vegetables, and parfait. Attorney General Bob McDonnell addressed the group. A recap of the September "Defending the American Dream" summit in D.C. was shown with remarks from AFP Director Ben Marchi.

Ben recognized Trixie Averill who was a big part of putting together this event, calling her to the podium to say thank you for her hard work. She had those of us who had attended the "Defending the American Dream" summit stand along with her as a testament of what AFP is doing as it continues to grow in Virginia.

After lunch there was time to visit delegate and senate offices, tour the capitol, wander the grounds, or just enjoy the beautiful day. Everyone went in different directions and met back at the bus at 4:30 for the drive home.

Many thanks to all for their time and dedication putting together an enjoyable and interesting day in Richmond.

Thanks also to Congressman Bob Goodlatte for the goodie bags provided for the bus ... the bottled water and snacks were greatly appreciated and only a few granola bars were left over.

More photos to be posted.....
Cross-posted at Americans For Prosperity