The fish that came to live at our house.... 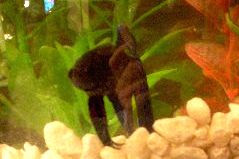 Pepe the Beta fish.
We are the new owners of a fish ... or, more accurately, SWAC Daughter is the new owner of a fish. She received it as a Valentine's gift from a friend and it now resides in its bowl near the woodstove.

As a tropical fish, it is supposed to have a minimum of 73 degrees to be comfortable. In the winter, it is rarely 73 degrees in our house ... except near the woodstove while it's cranked. When it dies down, the chill sets in. This fish will have to adapt until summer.

SWAC Daughter named him "Pepe" after the shrimp in the Muppets. Cute name. Cute fish.

Curiously, I've never owned a fish, never had a desire to own a fish ... I mean, what can you do with a fish? You cannot cuddle it or pet it. It just swims in its bowl.

But a funny thing happened on my way to ignoring this fish. I got attached to it by default. With SWAC Daughter's busy schedule ("Don't depend on me to feed that fish," I had told her), I have found myself drawn to it when it's time to feed it as I take the food and, not realizing most folks throw the food pellets on top of the water, I fed the fish one pellet at a time. He got used to me and I got used to him ... to the point where he now gets all excited and flips around and is animated when it's time to be fed.

I do believe this fish has a personality.

Wait a minute. I am not going to become attached to a fish.

But here I am writing about it and even posting a photo of this beautiful blue sea creature living in my family room....