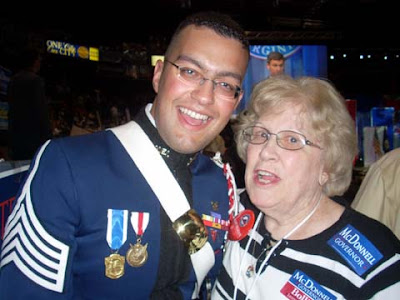 "Anyone can give up; it’s the easiest thing in the world to do. But to hold it together when everyone else would understand if you fell apart, that is true strength.”

[Here is the transcript by Cadet Colonel Adam Barqawi who addressed delegates at the RPV Convention 2009, May 30, 2009, and won the hearts of Virginia Republicans....]

There is no greater feeling than being surrounded by those who understand, that while bureaucrats bicker in Washington, our brave men and women in the military fight for our freedom on the streets of Baghdad and in the mountains of Afghanistan.

We have enjoyed so much freedom for so long that we are perhaps in danger of forgetting how much blood it cost to establish our Bill of Rights.

Dr. Judi Lynch, thank you for assisting with the journey that brings me to this podium today. I am joined today by my dearest mother “Mona,” who came all the way from Kuwait along with Nabeel my 12-year-old brother, and my brother “Adeeb,” a rising senior at Virginia Commonwealth University. I also wish to recognize Jay Williams and Carlin Crowder, my dearest friends and mentors.

I also have the ultimate privilege of carrying the saber that bears the name of and belonged to the Godfather of the Republican Party of Virginia, my role model and example, Mr. Donald Huffman, from when he was in the Virginia Tech Corps of Cadets.

It was about 4 years ago when I landed at the Washington Dulles International Airport. I was born and raised in Kuwait for 17 years; however, in the Middle-East you are not a citizen of where you are born, but rather a citizen of where your ancestors are from. My grandfather was Palestinian, and since there is no Palestine, I considered myself to be a man without a country.

As a foreigner in Kuwait I was not eligible for public or higher education. My father had instilled in me that if there is a will there is always a way and gave me the greatest gift: a lifetime of savings to attain an education in the United States.

As I was looking down through the list of states that I could potentially come to, I chose Virginia, because it said, “Virginia is for lovers” … and “that hasn’t happened quite yet.” Virginia Tech had the best looking campus from what I could see on Google Images and that became my destination.

During orientation I learned that Virginia Tech had 27,000 students, and the first question I asked myself was, “How would I ever be able to distinguish myself on such a massive campus.”

As I was enjoying lunch at one of the dinning halls, I saw a man walking in what I thought was the best looking uniform and as soon as I got over my inhibitions, I headed to him and asked, “How do I become like you, sir?”

His sharp appearance and confident tone of voice said, “We are the Virginia Tech Corps of Cadets; we develop and graduate leaders of exemplary character who are imbued with the concept of selfless service and are prepared to serve the commonwealth and the nation – either in or out of uniform - for a life time.” That was more than enough of a reason for me to sign up, but little did I know what I had gotten myself into.

It was my second week in the United States and I had no perception of what military training could be like. I watched my head being shaved and had no family to bid me farewell.

When I first heard the command, "On your face," I stuck my cheek on the floor when everyone else got in a push-up position. That is when I realized that I had no clue what a push up looked like; it would make sense when the average temperature in Kuwait reaches 140 degrees. I managed to do half a sit-up and ran a mile and a half in 18 minutes and 49 seconds before I woke up in the hospital. I distinctly remember waking up and the first question the doctor asked me was, “Who is the president of the university?” and I said, “George W. Bush.” I thus began my cadet career with some physical limitations, let alone the massive cultural gap.

I refused to give up. At the height of the challenge, my Drill Sergeant came up to me and said, “Adnan, anyone can give up; it’s the easiest thing in the world to do. But to hold it together when everyone else would understand if you fell apart, that is true strength.”

The Corps of Cadets instilled in me that if you set your mind to something you will achieve it. It continued to provide me with the tools and motivation to strive and work harder. I learned that a leader is someone who makes the best out of any situation. I managed to progress through the ranks as I started to learn more and more through the numerous hands-on leadership experiences.

As a freshman I learned that you cannot command if you cannot obey. As a sophomore, I learned the importance of coaching and mentoring. My junior year I was privileged to be able to train incoming freshmen focusing on the principles of dignity and respect.

The greatest honor was when I was selected as the Regimental Commander for Fall 2008. I never thought that a Middle-Easterner, graduating into the civilian world, would have the opportunity to command one of the top six senior military colleges in the United States. If anything, that reassured me that our backgrounds and circumstances may have influenced who we are, but in this great nation we are ultimately responsible for who we become.

Since my arrival, the values engraved on the pylons of the War Memorial Chapel at Virginia Tech were engrained in me. The values of Brotherhood and honor, service and sacrifice, leadership and loyalty, duty and Ut Prosim – that I may serve.

Through those invaluable experiences and many others, I have learned that "impossible" is nothing but a small word, thrown around by little men who would rather live in a world that is handed to them rather than explore the opportunities that they have to change it.

I have learned the meaning of individual responsibility; that no one is in charge of my welfare except myself.

I have learned that diversity is embracing your new culture rather than expecting the culture to embrace you.

On Monday I will be driving down to the Mississippi Delta to start my commitment with Teach for America, a national teachers corps that places recent college graduates in low-income communities to teach for 2 years.

I remember when I received my acceptance phone call from Teach for America, the woman said, “Congratulations, Adnan, you’re going to be teaching elementary school in the Mississippi.”

I understood the elementary school part, because that’s exactly what I wanted to teach, but I had no clue where the Mississippi was and I wasn’t going to ask her that. So my next question was, “Do they have sweet tea down there?” and she said, “Honey, they have fried chicken at every gas station.”

You know at heart I am a country boy.

In a nation that where you are born should not determine your life opportunities, there are 13 million children growing up in poverty, whom in 8th grade read at a 4th grade level, only 50% of them graduate from high school, and only 10% who make it to college graduate from college. That is a problem that money cannot buy and books cannot solve. That is when other human beings need to lend a helping hand.

When Mr. Donald Huffman and Congressman Bob Goodlatte heard the journey I just shared with you, they told me, “Adnan you do not deserve to be a man without a country.” Thanks to them, on April 17th at a Federal Court House in Roanoke, I raised my right hand and not only was I sworn in as a citizen of the United States of America, but a citizen of the greatest country on the face of this planet.

You know I do not call myself an Arab-American or a Middle Eastern-American but an American. Some Americans need hyphens in their names, because only part of them has come over; but when the whole man has come over, heart and thought and all, the hyphen drops of its own weight.

Thomas Jefferson once said: "My God! How little do my countrymen know what precious blessings they are in possession of, and which no other people on earth enjoy!"

As to where I stand:

I BELIEVE the strength of our nation lies with the individual and that each person's dignity, freedom, ability and responsibility must be honored.

I BELIEVE in equal rights, equal justice and equal opportunity for all, regardless of race, creed, sex, age or disability.

I BELIEVE government must practice fiscal responsibility and allow individuals to keep more of the money they earn.

I BELIEVE the proper role of government is to provide for the people only those critical functions that cannot be performed by individuals or private organizations and that the best government is that which governs least.

I BELIEVE the most effective, responsible and responsive government is a government closest to the people.

I BELIEVE Americans must retain the principles that have made us strong while developing new and innovative ideas to meet the challenges of changing times.

I BELIEVE Americans value and should preserve our national strength and pride while working to extend peace, freedom and human rights throughout the world.

FINALLY, I believe the Republican Party is the best vehicle for translating these ideals into positive and successful principles of government.

Ronald Reagan once said: "If we ever forget that we are One Nation Under God, then we will be a nation gone under."

Ladies and Gentlemen, from a proud American and a proud Republican, let us all be proud and humble and gracious to be citizens of this great land and may we never forget that freedom is not free.

Thank you and God Bless You.