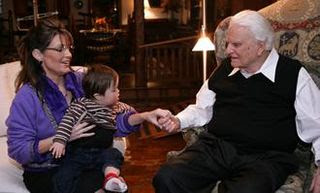 Two of the three individuals in this photo would be at risk from under nationalized health care as proposed by Democrats and Barack Obama ... Rev. Graham for being elderly ... and Trig for having Down's Syndrome. Photo from USA Today.

I saw the photo above in the USA Today showing Gov. Sarah Palin and her son, Trig, visiting with Rev. Billy Graham at his Montreat home in North Carolina ... and I couldn't help but think about what has been revealed in the nationalized health care bill now before the U.S. Senate. If "death panels" is too harsh a term to hear, how about "lack of compassion for those outside the mainstream"?

Rev. Graham, who turned 91 years old earlier this month, keeps a low profile these days ... but his son Franklin arranged the visit. As reported in USA Today:

After a book signing in Roanoke, Va., the former Alaska governor headed to Graham's retreat in the western North Carolina mountains for some spiritual and culinary sustenance. It was an "unusual" visit for Graham, who turned 91 on Nov. 7 and has mostly been restricting his company to family, said spokesman A. Larry Ross. Ross said the visit was arranged by Graham's son and fellow-minister, Franklin. The younger Graham, who owns a home in Alaska and became friends with Palin when she invited him to speak at a prayer breakfast several years ago, joined his father for the dinner.

I would love to have been a guest at that dinner table ... Rev. Graham, Franklin Graham (I very much respect his Samaritan's Purse ministry in Boone, NC), and Gov. Palin. Just think of the conversation with such a gathering of conservative minds!
Posted by Lynn R. Mitchell at 11/23/2009 05:45:00 PM

What an honor to be able to talk with Billy Graham. We also love Samaritan's Purse and part of our Christmas giving is in honor of different members of our family. May God continue to bless the Graham family.