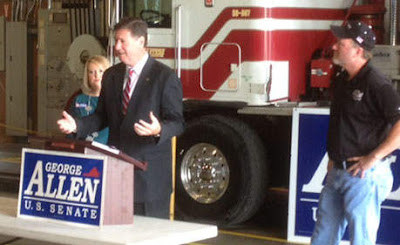 Throughout his years in public service representing the citizens of Virginia, George Allen has always listened to small businesses and worked on their behalf. Even now, during his U.S. Senate campaign, he has crisscrossed the Commonwealth and visited countless companies and their employees.

Today, Allen received the endorsement of the National Federation of Independent Business (NFIB) for the senate race in an announcement made by NFIB state director Nicole Riley, as noted in the following press release:


Today, George Allen was endorsed by the National Federation of Independent Business (NFIB) for the Virginia U.S. Senate race. The announcement was made in Richmond this morning at Cranemasters with Nicole Riley, State Director of NFIB Virginia, and Cranemasters President Brian Isringhausen. Cranemasters Inc. is an innovative small business that provides specialized crane services for rail industry construction, maintenance and removal.

“I’m honored to have earned the endorsement of the voice of America’s job creating small business men and women, the National Federation of Independent Business,” said George Allen. “The NFIB and I envision a better future where Virginia small business owners have the freedom and opportunity they need to grow, innovate and create new jobs for men and women. As Virginia’s voice in the U.S. Senate, I will continue to stand for a hassle-free, efficient and more accountable government that empowers small businesses to grow. We need less burdensome tax laws, reasonable regulations, affordable energy and real health care reform. I look forward to partnering with the small businesses of NFIB as we work to build a better future for Virginia families and businesses and send a message to the world that America is Open for Business Again.”

The National Federation of Independent Business cited George Allen’s commitment to tax reform and real health-care reform in earning this endorsement. In his Blueprint for America’s Comeback, George Allen outlines a pro-jobs growth plan of action to reinvigorate the entrepreneurial spirit of our country.  He supports a more fair, simple and competitive tax code that reduces the tax on job-creators from 35 percent to 20 percent. His plan also includes reining in regulations by requiring an economic impact analysis of any regulation costing more than $100 Million a year.  George Allen champions real health reform that will provide families with personal, portable market-based health care solutions, including allowing small businesses to join together across state lines in larger risk pools for greater choice and lower insurance costs. He is also a strong defender of Virginia’s “Right-to-Work” laws, giving hard-working men and women the freedom to choose whether or not to join a union.

“George Allen has been consistent in his push to reduce the tax burden placed on businesses and individuals,” said Nicole Riley, State Director, NFIB Virginia. “He has shown solidarity with our membership by publicly expressing his opposition to recent National Labor Relations Board actions such as ‘ambush elections’ and his push to enact real health-care reform that lowers costs for individuals and small businesses really resonates with NFIB members in Virginia.  George Allen is the proven small-business advocate that our members so desperately need in Virginia.”

The National Federation of Independent Business is the leading small business association representing small and independent businesses. A nonprofit, nonpartisan organization founded in 1943, NFIB represents the consensus views of its members in Washington and all 50 state capitals. To learn more, visit www.nfib.com.