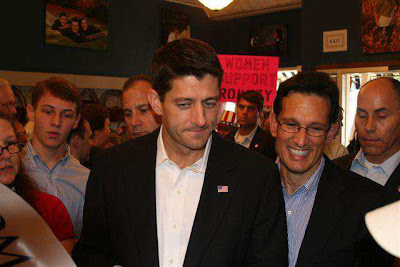 Like a scene from an old western movie, the good guys have rolled into town for the 2012 Presidential showdown. They are the Young Guns of the GOP, leaders in the U.S. House of Representatives who have a bold vision for the future of America.

Eric Cantor. Majority Leader in the U.S. House of Representatives. From Virginia.

Kevin McCarthy. Majority Whip in the U.S. House of Representatives. From California.

Eric Cantor described the three in the 2010 book, Young Guns: A New Generation of Conservative Leaders, co-authored by all three:


"A Jewish guy from Virginia, an Irish-Catholic from Wisconsin, and a California Baptist walk into Congress....

"It sounds like the beginning of an old joke, but we'd like to think it's the start of something new.

"Paul, Kevin, and I are, as Bill Murray famously said to his demoralized fellow recruits on graduation day in Stripes, 'very different people. We're not Watusi. We're not Spartans. We're Americans, with a capital "A." ' The three of us came to the United States House of Representatives from very different places. No one will ever mistake Janesville, Wisconsin (or Richmond, Virginia, for that matter), for Bakersfield, California. We also come from very different backgrounds. I pray on Saturday with a Southern accent. Paul and Kevin go to church on Sunday and talk to God without dropping their 'gs.'

"What we have in common is our love for this country and the principles that made it great. From our different vantage points, we've seen both parties abandon these principles and lead America down a perilous path."

The three men are the co-founders of the Young Guns of the Republican Party, the new generation of leadership that has been steadily moving forward, recruiting candidates, and working its way into leadership through hard work and accountability.

In 2010, 62 of the more than 90 Young Guns candidates were elected to the U.S. House, winning the majority for the GOP. Proud Republicans all, they believed the party had lost sight of the ideals it believed in -- small federal government, economic freedom, encouraging small business without additional government oversight, individual freedom -- supporting Americans as they pursue and build their dreams. They believe in common sense solutions to our country's problems

From their ranks, Paul Ryan came on Mitt Romney's radar during the search for a 2012 vice presidential ticket mate. With a deep bench of prospects, including Virginia's own Governor Bob McDonnell, presidential candidate Romney chose Ryan, a budget-wielding numbers cruncher who is needed at a time when the economy and jobs are the top issues of concern.

In the Young Guns book, Ryan wrote of his concern about Washington's closed-door, backroom deals -- the "Washington Way," he called it -- that "doesn't seek input from both sides of the issue; it muscles through bills on strict one-party votes."  The seven-term Congressman shared his concern at the lack of up-or-down votes and "the-ends-justify-the-means" attitude to obtain the desired outcome that have resulted in trillion-dollar deficits and government takeovers.

At the age of 42, he is the Chairman of the House Budget Committee, and a senior member of the House Ways and Means Committee who is alarmed at America's financial crisis. Ryan has proven he is willing to roll up his shirt sleeves and make the hard decisions to find solutions in securing the country's financial future while enduring the criticism.

The Young Guns of the GOP continue to change the face of American politics. As Ryan wrote in Young Guns:


"We can take being the Democrats' whipping boys. We can take the attacks. What we can't take is losing the timeless ideas that made this country history's greatest experiment in freedom -- and that will endure as long as Americans keep faith with those ideas.
...
"It's time we stop deferring tough decisions and promising fiscal fantasies. It's time we tell Americans the truth, offer them a choice, and count on them to do what's right."

Paul Ryan is now part of America's Comeback Team in the 2012 presidential race. If he and Romney are elected in November, it will be interesting to watch the association with Virginia due to Ryan's close working relationship with Eric Cantor who represents the 7th Congressional District.

Ronald Reagan once said, "If you're afraid of the future, then get out of the way, stand aside. The people of this country are ready to move again." November will tell if Americans choose the freedom that comes with hard work.