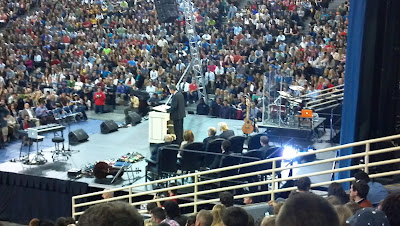 Real estate mogul, entrepreneur, entertainer, and part-time politician Donald Trump addressed thousands of students, faculty, the public, and press at Liberty University's packed auditorium Monday. The University had an overflow, standing room only crowd that was expected to be in excess of 10,000 with satellite locations at Thomas Road Baptist Church and Towns Alumni Lecture Hall available for thousands of additional viewers.

The event opened with prayer and worship music by the Liberty Worship Band and a special music group called the Sounds of Liberty. University President Jerry Falwell, Jr., then introduced Congresswoman Michele Bachmann, a Liberty parent, who sat on stage with University administration for the event. 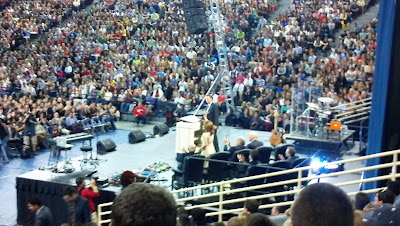 Trump was introduced by President and Chancellor Falwell who read a biography of the seemingly larger-than-life man, speaking of his many successes that included real estate, the Miss USA pageant, an extremely successful "The Apprentice" television show, and the author of numerous books in addition to his short-lived recent run for President of the United States before endorsing Republican candidate Mitt Romney.

He is also famous for making, "You're fired," a household phrase and is the owner of a nice piece of real estate outside Charlottesville known as Trump Winery that is run by his son, Eric, also of "Apprentice" fame. 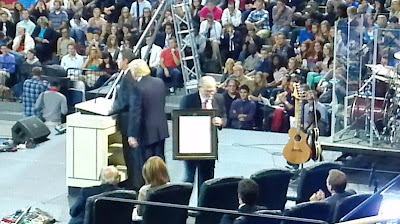 Before beginning his remarks, the University bestowed an honorary Doctorate of Business degree to the 66-year-old Trump who thanked Liberty University and praised them for their success. He spoke highly of Liberty's founder, the late Dr. Jerry Falwell Sr., and his aspirations and accomplishments. Trump, who waived his speaking fee for today's appearance, also praised Falwell's sons for carrying on their father's dream and the tradition of the University. 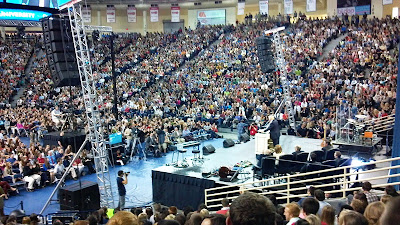 In front of a crowd where some thought he was too worldly to address a Christian university, Trump spoke about growing up in the First Presbyterian Church in Queens, NY, where he attended Sunday School. He said that learning about God -- the knowledge of God -- was greater than having all the business knowledge in the world. He emphasized his desire to be at this gathering and noted that he was Presbyterian and a Christian ... a real Christian.

He then went on to say our country is in real trouble and criticized Democrat President Barack Obama, calling him a Teflon president because nothing sticks to him and the press have failed to scrutinize his blunders.

"Our leaders do not get it," he noted. He said Obama is weak on the economy and foreign policy, that he screwed up the Olympics and mishandled Libya, and criticized him for inviting presidents to the White House from other countries who are really dictators and not presidents at all.

Trump also repeated a belief he has said before, emphasizing that if America is going to fight wars for other countries, we should ask those countries for 50 percent of their oil revenues as repayment. "And I would ask for 75 percent but I'm being generous," he added.

The United States, he said, has spent $1.5 trillion on wars and gotten nothing in return. "To the victor goes the spoils" was the way it used to be but not anymore, and he added that America has enough domestic oil without having to buy foreign oil.

The country, he remarked, is being run horribly by "idiot politicians," and then turned to Michele Bachmann whose re-election race shows she is up two points in the polls and said, "You are going to win. You'd better win!"

Trump went on to say that our dollar has been devalued and foreign policy is a mess and, for our country, we need to recover now or we will never recover. This, he said, will be the most important election American has ever had.

Trump, who was the first speaker in campus history to have his remarks streamed live on the Liberty University website, then changed gears and commented that he was going to talk about success. He launched into a story about how his agent had told him not to do "The Apprentice" but Trump had entered into a handshake agreement with ABC and committed to the show so he went through with it. "The Apprentice" went on to become the #1 show, and Trump and his agent ended up parting ways.

"Number one -- always honor your handshake," Trump said, as he began telling his audience the seven points of success.

Number 3: Love what you're doing.

Number 5: Never give up.

Number 6: You've got to be able to handle pressure. He stressed he has lots of friends and even more enemies -- lots of enemies.

Number 7: Have a real passion for what you're doing.

And then he promptly went on to share the other three.

Number 10: Get a prenuptial.

Taking a few questions from the audience, Donald Trump expanded on his business wisdom. Growing up in Queens as the son of a contractor, he used to look across at the buildings in Manhattan and he wanted to construct buildings like that. "The harder you work, the luckier you are," he said.

Best college courses to take? "Learn something useful. Don't waste time -- don't get a useless degree." However, he then added, "But if you truly have a passion for something, go for it. Use your college education as a base."

As Trump concluded his remarks, Falwell returned to the podium and they joked around and poked fun at each other before Falwell thanked him for coming to address Liberty's Convocation, and the entire auditorium stood to applaud and give Donald Trump a standing ovation.
Posted by Lynn R. Mitchell at 9/24/2012 04:43:00 PM