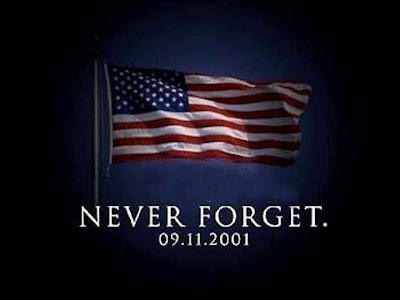 "We've defeated freedom's enemies before, and we will defeat them again. ... There is a difference between being alert and being intimidated and this great nation will never be intimidated."

It has been eleven years since the terrorist attacks on September 11, 2001, a beautiful morning in Virginia, Pennsylvania, and New York City. Most can remember where they were when they heard the news of commercial airplanes hijacked by al-Qaeda terrorists hitting the twin towers of the World Trade Center, the Pentagon, and crashing into a Pennsylvania field on its way to destroy the U.S. Capitol or White House.

Eleven years later the emotions are still raw for those who were affected by that day. While the memory had faded for some and a younger generation was too young for it to be significant, others will never forget.

New York City lost 343 firefighters and paramedics, and 75 NYPD officers perished. The ones who survived have deep emotional memories of that day.

Over 20 percent of Americans knew someone who was hurt or killed on 9/11. The resulting fires at the World Trade Center burned until December, 99 days after the attacks. More than 300 firefighters went on leave from respiratory problems as of January 2002; more have had problems in the years since. Clearing the sites involved removing 1,506,124 tons of debris.

The Pentagon, one of the most secure buildings in the world, was hit by hijacked American Airlines Flight 77 resulting in 124 deaths and 76 injuries at the Pentagon in addition to the loss of 64 passengers on the plane.

United Airlines Flight 93 spiraled into the ground outside Shanksville, Pennsylvania, taking with it 40 souls who fought back and prevented additional national tragedy when the plane did not reach Washington, DC.


Today thank a military member, firefighter, police officer, and other First Responders ... say a prayer for those who were lost and their families ... educate the younger generation so they will be alert to this always-present danger ... and never forget.