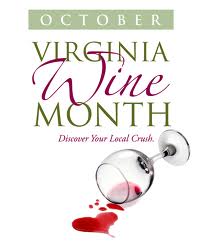 Virginia, traditional in celebrating the glorious fall colors of October, will begin a new tradition in 2012 with the very first annual Virginia Wine Summit hosted by our own Governor and First Lady Bob and Maureen McDonnell.

The McDonnells, who have championed Virginia's ever-growing wine industry during their three years in the Executive Mansion, will bring together wine experts and industry leaders from around the world on October 2, 2012, to discuss the dynamic and evolving state of Virginia wines and Virginia's growing culinary offerings.

Internationally acclaimed British wine authority Steve Spurrier, consultant editor to Decanter Magazine and president of the Circle of Wine Writers, will be the keynote speaker as well as lead a blind tasting of wines from Virginia and other globally recognized wine producing regions.

The Summit, to be held at the Richmond Marriott Hotel, is part of the McDonnell administration's ongoing strategic initiatives to promote the wines and wine tourism of the Commonwealth.

“I have made the promotion of wine and wine tourism key components of my economic development and jobs creation agenda," noted Governor McDonnell. "The Virginia Wine Summit, which already has attracted a world-class cast in its inaugural year, is a natural continuation of those efforts, one we hope becomes an annual event to better showcase all we have to offer. Having internationally recognized wine expert Steven Spurrier participate in the summit is a great start to achieving this goal.”

Spurrier will be joined at the summit by some of the nation’s foremost wine professionals including  Anthony Giglio of Food & Wine, noted wine importer and lecturer Bartholomew Broadbent, Master of Wine Jay Youmans, Dave McIntyre who is wine writer for the Washington Post, Master Sommelier Kathy Morgan, cheese expert Liz Thorpe, and Harry Root who owns the wholesale Grassroots Wine.  These experts and others will lead panels, tastings, and general discussions for an audience filled with winemakers, restaurateurs, sommeliers, connoisseurs, media, wine-shop owners, and other industry professionals.

Mrs. McDonnell, who originally conceptualized the idea of the summit as a way to better promote the Virginia wine industry, was enthusiastic about all it could offer.  “The Governor and I are excited to host the first Virginia Wine Summit," she commented. "There is so much momentum and excitement around Virginia wine, wine tourism, and Virginia as a culinary destination."

She added, "We wanted to create a single event to build on that energy. We also wanted to have a forum where participants could gain an in-depth review of where the industry and our wines are today.”

Sales of Virginia wine reached a record high in fiscal year 2011 with more than 462,000 cases, or more than 5.5 million bottles, sold. Virginia currently ranks fifth in the number of wineries in the nation with 210. Virginia is also the nation’s fifth largest wine grape producer. According to a recently released economic impact study, the Virginia wine industry employs more than 4,700 and contributes almost $750 million to the Virginia economy on an annual basis.

This has been an exciting year for Virginia wines, most notably with Wine Enthusiast’s recognition of Virginia as one of the 10 Best Wine Travel Destinations of 2012 and Andrew Harper’s inclusion of Virginia on his list of Top 10 Wine Regions in America. More recently, Fodor’s listed Virginia as a top wine travel destination.

The Virginia Wine Summit will kick off the Commonwealth’s annual October Virginia Wine Month activities.
Posted by Lynn R. Mitchell at 9/05/2012 09:34:00 AM