George Allen stands up for homeschooling 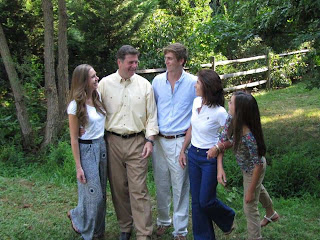 George and Susan Allen with their family.

As a mom who educated my children at home for 16 years, I appreciate George Allen's support for parents' rights to homeschool. Each year Virginia celebrates Virginia Home Education Week, a recognition that was begun by then-Governor George Allen in 1995.

Here is his stand on homeschooling from George Allen for U.S. Senate website:


Ever since George Allen was elected to Thomas Jefferson’s seat in the Virginia House of Delegates, he has maintained that parents have the right to educate their children in accordance with their values and beliefs – and that the government should not arbitrarily interfere with a parent’s wishes for their children.

A parent’s choice to homeschool their child is a decision that must be respected and must be legally protected.

In the U.S. Senate, George Allen was the main, original cosponsor of the “Homeschool Non-Discrimination Act” (HONDA) in 2003 – and again cosponsored the legislation in the following Congress.

HONDA sought to clarify federal laws that overlook or unfairly impact homeschool students. The bill would have ensured that home educators have access to Coverdell Education Savings Accounts (ESAs), which allow parents to save $2,000 a year in tax-free accounts for a child’s educational expenses.

If elected to the U.S. Senate, George Allen will


Let your homeschool friends know that George Allen will stand with them when it comes to homeschool rights.
Posted by Lynn R. Mitchell at 9/02/2012 06:29:00 PM