The George Allen ad and my journey with Rhonda Winfield

"George Allen cared enough to reach out as father and husband to a grieving mother, committed to carrying on my son's legacy with leadership and strength."
- Rhonda Winfield, Virginia Voices ad

I saw the new George Allen television ad for his U.S. Senate campaign, and it brought back a flurry of emotions that still touch me to this day. Titled "Rhonda," it features Rhonda Winfield, an Augusta County woman who experienced every mother's nightmare when her 19-year-old son, Lance Corporal Jason Redifer, USMC, was killed in Iraq on January 31, 2005.

I remember the pain and emotion when Rhonda shared her story on an overnight trip to D.C. where we talked for hours at dinner. As the mother of a son the same age, I could not begin to imagine the gut-wrenching sorrow of losing a child.

America had been plunged into war after the terrorist attacks of September 11, 2001. Rhonda's son was the first casualty from the Shenandoah Valley who gave his life for this country.

His military funeral was held in a white chapel overflowing with friends and relatives on an unseasonably warm February day in the farming community of Stuarts Draft. Combat boots, helmet, and flak jacket were displayed at the front of the sanctuary along with a rocking chair with Jason's cowboy boots, work gloves, and chaps, and a fishing pole leaning against the arm of the chair. It was a heart-wrenching ceremony that ended with Jason's fellow Marines presenting the Purple Heart to his mother who had, sadly, joined the ranks of Gold Star moms.

Around that time, another Gold Star mom, Cindy Sheehan, began traveling the country promoting an anti-war agenda after her son died in Operation Iraqi Freedom. However, she did not represent other Gold Star moms whose voices were missing from the dialogue. That voice was found in a woman named Rhonda Winfield.

The catalyst was a newscast that reported Sheehan had set up an anti-war site in Crawford, Texas, complete with a display of white crosses bearing the names of those killed during the war. One of those names was Jason Redifer.

It was August 2005 and I was volunteering at the Republican booth at the Augusta County Fair when Rhonda dropped by, and the discussion turned to Sheehan and the white crosses. Rhonda was upset knowing that Jason's name was on one of them. She desperately wanted to be a voice in opposition to Sheehan.

The turn of events is best captured in her 2006 book, When Johnny Doesn't Come Marching Home: A Mother's Story of the Price of Freedom, where she wrote:


By the time I had finished [venting about Cindy Sheehan], I had not only raised my blood pressure by at least twenty points but had unwittingly organized a rally.

My friend, Lynn Mitchell, who had launched the hailstorm of emotion at the fair, emailed me the next evening with a news release for my approval inviting everyone to come join me on the courthouse steps the following weekend for a rally in support of our troops. Game on! (pp. 126-127)

The rally would be a way to help give Rhonda a public voice as a Gold Star mother with a different point of view from that of Cindy Sheehan. With the help of friends, we planned the event and immediately began sending press releases to every news outlet possible -- local, regional, and national. If Sheehan was so visible in the news, why not try to offer Rhonda the opportunity she was seeking so she could be heard?

What happened next none of us expected. Rhonda wrote about it in her book:


When I awakened the next morning I received a phone call from Lynn. Thinking it was just another call to fine tune details for the rally, I greeted her with my usual jokes and immediately noticed that she wasn't laughing. ... I asked what was up and she said, "I hope you were serious about wanting to get your message out. FOX News just called. They picked up our press release for the Rally in the Valley. They want you to appear on their FOX News Sunday show." (p. 130)

Chris Wallace with Fox News Channel was going to interview two Gold Star moms with opposing opinions about the war. This was Rhonda's chance and, even though it was not Cindy Sheehan herself, it was someone from her camp and that was enough for Rhonda.

She asked me to accompany her in the car sent by Fox News to pick us up after the rally on Saturday and drive us to D.C. for an overnight stay before her appearance early Sunday morning. Not only did Rhonda appear on Fox News Sunday but she was composed and articulate on live national television while discussing her point of view that was the polar opposite of the politically-active, anti-war woman beside her.

Leaving D.C. after the Sunday morning show, the driver took us to Arlington Cemetery to visit Jason's grave. Although I had planned to sit in the car and allow Rhonda some time alone with her son, she asked that I accompany her. It was a solemn walk from the car to the grave site as I could see the still-raw emotions bubbling up in her. What we found when we reached the headstone was another grieving mother. Rhonda reached out to her and they clung to one another in a heart-aching sadness only grieving mothers can know.

Rhonda always wore Jason's dog tags around her neck. She had them when she appeared on Fox News, and they were around her neck eight months later in April 2006 when we drove to Harrisonburg for a rally with George Allen, who was running for re-election. After the event, she waited to meet him, and to my surprise, gave him the dog tags.

From the new George Allen Virginia Voices ad, in Rhonda's own words:


"Following Jason’s death, we received an outpouring of love and support. One of the letters that we received was from George Allen. What made it different was a hand written note, parent to parent. I was able to attend a speech George Allen was giving. I was so moved, that I took Jason’s dog tags off my neck and I handed them to him and he still has those dog tags to this day."

Quite frankly, as we left the rally and walked down the sidewalk, I asked if she was absolutely certain she wanted to give away those dog tags. She said, simply, yes.

The summer and fall of 2006 were spent on campaign stops and working headquarters. Rhonda finally had the opportunity to meet Cindy Sheehan in Northern Virginia the day before the election and gave her a copy of her book that included a letter to Cindy.

I treasure those special times with Rhonda and the journey she allowed me to be on with her as a friend. Very few people in life give so much to the protection and sacrifice for this country. 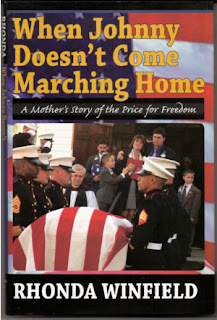