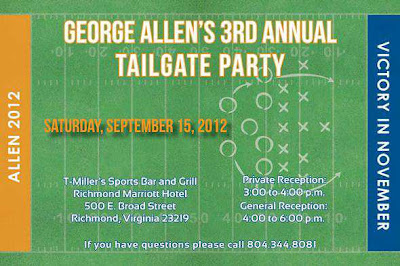 It's a sports party as George and Susan Allen get together for some good food, great friends, and football at their 3rd Annual Tailgate Party at T-Miller's Sports Bar on Saturday, September 15, 2012, from 4-6:00 p.m. in downtown Richmond.

T-Miller's Sports Bar in the Richmond Marriott is the site of this fun event with former Governor George Allen who is a candidate for the U.S. Senate.  It's time to enjoy lots of college football, some politics, and plenty of interaction with other sports and political enthusiasts while rallying for the final stretch of this campaign. Cost is $50 per person.

T-Miller's Sports Bar features 27 high-definition televisions for year-round viewing of sports events. Featured games can be seen on the huge screen that is visible from just about any seat in the restaurant.