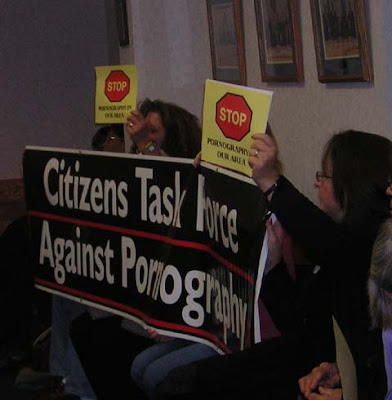 Staunton City Council met last night in a packed room of over 100 citizens who were there to encourage them to pass zoning ordinances that would restrict the location of adult businesses in the city.

-- An increase in crime such as assault, robbery, and theft;
-- Property values were lowered (residential and community properties);
-- Nearby businesses suffered financially because they had to close early to avoid the unsavory characters who frequented the adult business and often had to hire security guards to protect their businesses;
-- Area housing suffered a high turnover of residents as people moved away and often the area became mostly rental properties.

The overall finding was that adult businesses have an adverse effect on the qualify of life in a community.

The Planning Commission, interested in doing what was right for the community but also interested in preserving the First Amendment rights of those who operate a business, listened to the public, researched, used studies from other locations, and looked at zoning ordinances that were in use in Henrico, Chesterfield, Waynesboro, and Harrisonburg. They also listened to the citizens of Staunton.

Their conclusion: As a city there was an interest in regulating the location of adult stores because such businesses would have an effect on commercial and historic structures, tourism, and families, churches, and playgrounds.

The owner of the adult store on Springhill Road, Rick Krial, had been expected to attend but was not seen at the meeting. He was indicted on 16 counts of obscenity last week.

The ordinances restricting the location of adult businesses include:

-- Cannot be closer than 500 feet to schools, day care centers, churches, and neighborhoods;
-- Must locate in areas zoned for light industry;
-- Must apply for an annual permit from the police chief;
-- Must pay a $300 fee;
-- Must submit to a background check.

They also apply to adult motels and adult entertainment as well as adult stores.

The zoning ordinances adopted by City Council are based on tried-and-true laws that are already in place in other localities.

Augusta County's Board of Supervisors is studying enacting zoning legislation to limit the location of adult businesses in the county. They are expected to take it up at their December 12th meeting at the Government Center. 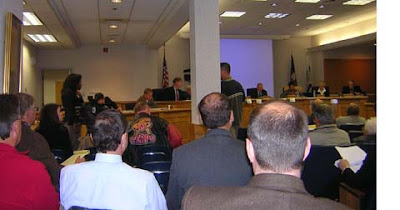 Berryville and Timberville councils are interested in passing their own ordinances and have contacted the Citizens Task Force to ask for direction and information.

SWAC-GOP grassroots leaders were there to support citizens who were overwhelmingly against the After Hours adult store in their community and who had approached SWAC Republicans to ask what they could do to fight it.

Staunton Chairman Anne Taetzsch, who first offered a forum that brought out 120 anti-porn citizens and who worked with Augusta Chairman Kurt Michael (Family Forum), was there to address City Council. Also present were voters from Augusta County and Waynesboro who were observing the process as Augusta County prepares to pass ordinances and Waynesboro looks to put more teeth in theirs.

Funny, Harrisonburg isn't having a problem with adult businesses in their area...

Actually, Phil, Harrisonburg took care of the issue of enacting zoning ordinances two years ago. At that time three adult businesses had set up shop. Since the ordinances were passed, no new adult stores have applied.

Being pro-active is what works -- setting up the ordinances before the problem is at your front door.

The ordinances are not to restrict these businesses from opening in localities; it is to restrict where they can be located so they are not near family-oriented areas.