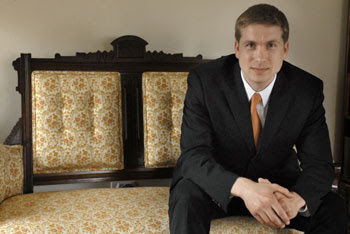 Josh Levy (photo by Daily Progress)
Josh Levy is a young man I admire very much for standing up for what he believes in. His blog, "Win the War," advocates victory in Iraq and he backs it up with sound arguments and background information. He talked with the Charlottesville Daily Progress about school, his role in supporting the troops, and his future. One of his passions is his support for John McCain for President.

Josh organized a "Win the War" rally last June in Charlottesville when anti-war protester Cindy Sheehan was in town, a job he very successfully succeeded in by pulling in over 100 pro-victory supporters from the surrounding area including SWAC. It was the first time I had met him in person and I found him organized, pleasant, and determined in his beliefs. He was not afraid to stand up to the rabid anti-war protesters. He was standing up for the silent majority, the people who could not be there or felt uncomfortable in the presence of people who shouted them down and called them names.

The Daily Progress put it well:

... with the next presidential election around the corner, Josh Levy, a third-year University of Virginia law school student, believes it is critical to speak to what he views as America’s new "silent majority": those who support or could be persuaded that it is in America’s best interest to achieve what Levy and others view as victory in Iraq. Levy organized a "pro-victory" rally in July, when anti-war activist Cindy Sheehan came to Charlottesville, and is thinking about starting a citizens advocacy group to argue, in part, that withdrawal now would mean "retreat."

But he knows that time is of the essence.

"When a president takes a country to war … an invisible clock starts ticking," said Levy, 34. "[Americans are] not going to wait forever."

Thank you, SWAC girl! I am honored to receive your attention and compliments.

And stop being so modest! You know we could never have pulled off that rally even half as well without your contributions of men and material!

Thanks, Josh ... but truth be told I was impressed with your organizational skills with that rally and everything else since.

It is nice to have young people who understand the need for a strong military force and who support our men and women who protect us on a daily basis.

I look forward to seeing what you accomplish after graduating from law school in May. Thank you for your leadership.

Josh -- When you graduate, are you shipping out to Iraq? You know, fighting for what you believe in?

Do you, as other libs have proclaimed, "support the troops"? If so, when are you signing up?

If you are for universal health care, do you plan to become a doctor or nurse and offer free care for those you feel need it?

If you are for shelter for the homeless, are you willing to offer a bedroom in your house for them?

Josh is doing a great service to our military men and women by publicly supporting them, something the troops have said is uplifting to them as they serve around the world.

Point being ... liberals like to point fingers at others while ignoring their own lack of action. You appear to fall into that category.

I don't support the war.

Nor am I for universal health care, nor the homeless. And I am not a liberal.

Your point is, well, non-existent.

Assumptions based on a binary way of thinking generally fair to capture the nuances of reality.

People like Josh (and you) need to discard the worn-out "support our troops" and take real action, more than putting a magnetic sticker on your vehicle or trying to convince yourselves that the war in Iraq is nothing more than a disaster for this country in every sense.

Maybe the best way to really support our troops is to stop supporting the war.

Hoobie, you have made assumptions of your own so your point is non-existent also. You obviously do not know us.

We do not just say we support the troops. We have done much more but we don't publicize it. We have had military families to our homes for meals; we have taken meals to them; we have given gift certificates to families while loved ones are in Iraq; we have babysat their children; we have sent care packages and written letters and sent cards. We have pulled in the families of those who have been killed. We visit the graves of those three young men who have died in Augusta County. We are there when the troops leave, and we are there when they return. We are in constant touch with the military community.

And we stand on the streets to publicly show support because we do not want our military to see only anti-war protesters on the news. They have told us how much it means to see Americans stand up for them on the streets. We will continue to do it even under the criticism of people like you.

We don't just say we support the troops. We live it.

You just got served, hoobie. Foucault would be proud...