Realtor Kevin Lacey addresses Augusta Board of Supervisors.
After two hours of wrangling with words and positions, the Augusta County Board of Supervisors voted Wednesday night to delay a decision about county reassessments until December 31, 2008 ... but they made it clear that short of a catastrophe they intended to go through with mailing them out because, as a couple of supervisors commented, they don't want to be out the $614,000 it cost for the reappraisals or defy state law. 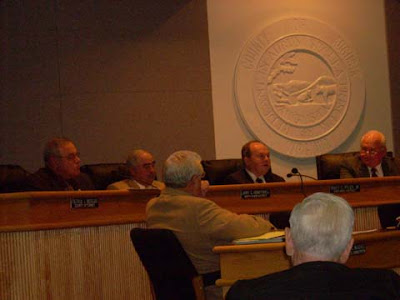 The motion had been tabled two weeks ago and was brought back to the floor Wednesday night when Supervisor Pyles presented his research and the reasons he thought it should be postponed. By law, the state of Virginia requires localities reassess every four years (counties over 50,000 population) or every six years (counties under 50,000 population). The penalty for not following through is a withholding of ABC profits which amount to $38,000 in Augusta.

Citing the reasons given above and backing it with figures, Mr. Pyles held up two Multiple Listing Books for this area. One was from 2004 and the other was current. The current book was 2 1/2 times thicker than the first; he reemphasized that the housing market is stagnant and home values have fallen.

He noted that in Prince William County, according to a Washington Post article from October 17, 2008, real estate is down 41%. Locally, it is down 38%. Neighboring Bath County reassessed in April of this year and had a revolt by citizens that resulted in terminating the appraisal company and doing away with the overly-inflated appraisals.

A purchasing agent for American Safety Razor (ASR) in Verona, Mr. Pyles noted that jobs are being affected by the economy. His company, he said, makes the blades for Lowe's and Home Depot to cut carpet, etc.; those companies are reportedly in the crosshairs of the mortgage crisis as less people are able or willing to do home repairs. Less carpet sold ... less need for blades purchased from Augusta County's ASR. Less work ... less need for employees. People are hurting, he said ... and local state employees are also going to be affected by the Commonwealth's cutbacks which will in turn affect the local economy.

Some folks have called him to say they cannot afford more taxes to the county; some have said they will tighten their belts and try to make do. Some asked him if the county could afford to do without the extra revenue. They were concerned about the county but it is time, he said, for the county to be concerned about its residents. 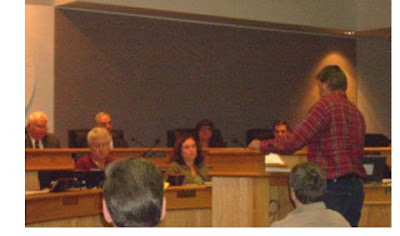 At the conclusion of Supervisor Pyles' comments, the other six supervisors were given the opportunity to respond ... and the running theme in all their remarks was the fact that state law required they reassess. One young supervisor said he had "never broken the law in his life and wasn't about to start now." Mr. Pyles again explained that the law sets in place the penalty of lost ABC profits if you do not assess.

Another concern of the supervisors was throwing away $614,000, the cost of the assessments. Several years ago that was the approximate amount spent on studying the megasite so it would not be a precedent-setting event to have money spent in vain.

One supervisor said Bath County was "testing the waters" when they mailed reassessments in April because they were two years earlier than called for by law and could, therefore, put off their assessments. All the supervisors stressed to the public to trust them ... they would do the right thing ... equalization of the tax rate would make things fall in line if the assessments were too high.

Equalization of the tax rate means the county's tax rate would lower to offset assessments ... if the county so chooses. In 2005, I sat through the county proceedings when Mr. Pyles proposed a two-cent drop in the rate to equalize the 22% raise ... and it was voted down by the Board of Supervisors. The last time the county voted to equalize assessments was 1983.

The rancor on the Board was evident and a couple of them were not veiled in their remarks on what Mr. Pyles was attempting to do with one commenting that he was "tired of listening to you." It came across to the public, and several commented on their shock at the animosity that had been expressed toward another supervisor. A dozen local residents addressed the Board, all in agreement with Mr. Pyles.

One resident was especially vocal when her voice broke as she expressed extreme disappointment at what she had witnessed and asked that supervisors keep the inuendos behind closed doors. She appreciated their concern about not breaking the law ... the overriding theme of the six rebutting supervisors ... but that these assessments would look foolish in a year. There were people in the county, she said, who had their backs against the wall financially ... food pantries were being affected with less donations and less allotments from the USDA ... and the assessments hurt renters, too, as landlords raise rates. People, she said, have notched their belts to the last notch ... but the county has not ... and should reconsider further burdening taxpayers. Others who spoke echoed her concerns, and added that these were financial times they had never seen in their lives.

Local realtor Kevin Lacey addressed the Board armed with research as someone who has spent 17 years selling over 1,700 homes in the area. The economy, he said, is in the tank. While home sales have stagnated, overall prices rose 11.9% over the past four years ... not 33% as indicated in reassessments. In 2006 and 2007, real estate lost value. A home that sold in Teaverton Subdivision in Fishersville four years ago for $400-450,000 would today be worth at least $70,000 less. He predicted it would be 2012 before home prices built back up to the place where they are now. Sales are down 38% ... one local builder has already gone bankrupt.

Even 90-year-old Speedy Hite, a long-time Augusta County resident and career Army man who said he has been dabbling in real estate for 65 years, chided the Board about being concerned over breaking the law by giving the taxpayers a break ... and joked that if they ended up in jail he would be happy to bail them out.

One resident asked if the county would be willing to buy his house for his reassessed value.

The stories from taxpayers were just a drop in the well of what is to come, in my opinion. The BOS voted down Mr. Pyles' motion 6-1, then proceeded to vote 7-0 to hold off mailing notices until Dec. 31, 2008, to see what happens with the economy.

The Board is made up of one Democrat (Pyles), two left-leaning independents (Sorrells and Coleman), and four Republicans (Beyeler, Howdyshell, Shifflett, Garber). Word is on the street today about last night's meeting ... the community is buzzing.

DJ McGuire at the Right-Wing Liberal has some thoughts on this ("Augusta County tax battle begins"), something he is familiar with after going through the same thing last year in Spotsylvania County in eastern Virginia.

More can be found at the Waynesboro News Virginian and the Staunton News Leader.

Disclaimer: This is my compilation of what occurred in the Board of Supervisors meeting as taken from my nine pages of legal pad notes.

Email ThisBlogThis!Share to TwitterShare to FacebookShare to Pinterest
Labels: Augusta County Board of Supervisors, property taxes

" The last time the county voted to equalize assessments was 1983."

That has to change - pronto!

Where do you stand on this Lynn?

DJ, the fact some of the supervisors said, "Trust us ... we will do the right thing," was not comforting with that 1983 date in mind. The fact the six supervisors were all lined up against one who was trying to look out for the welfare of the county citizens came across loud and clear to the audience ... and I don't think people took too kindly to it.

One man said he saw six politicians sitting up there ... and Tracy Pyles.

Ned, I am with the taxpayers on this one.

These are extraordinary times we are living through with predictions that the economy may get much worse before it gets better.

The BOS equalized the tax payment in 1983. That should raise a red flag to those who hope this will be the year they do the right thing.

I think it's time for some BIG changes on that Board; and it starts with Beyeler.

Lynn what you are not mentioning here about Mr Pyles is this,

"If the county needs additional revenue during 2009, Pyles said the tax rate could be raised to obtain it."
News Virginia Oct 8th.