Newly replaced 4'x8' Chick sign along with the new freedom of speech 4'x8' sign bought by Tom Sheets. The signs are now mounted on the side of his Blue Ridge Lumber business at the back road to Augusta Medical Center, site of the vandalized-and-then-stolen original Chick sign. 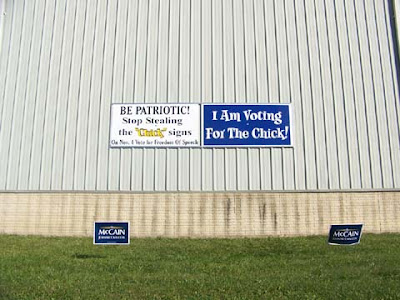 First, the 4'x8' I Am Voting For The Chick sign was vandalized when someone spray-painted "NOT" on it. Owner Tom Sheets left the sign so all could see what the vandals had done.

Then, two weeks ago, the entire sign disappeared overnight leaving a bare spot between the two McCain yard signs ... a fact that was noticed and commented on by many in the community.

Tom Sheets took it in stride and reordered another 4'x8' Chick sign ... along with a 4'x8' message to those who have stolen Chick signs throughout the SWAC area:

BE PATRIOTIC!
Stop Stealing
the "CHICK" Signs
On Nov. 4 vote for Freedom Of Speech

The signs are now mounted on the side of Blue Ridge Lumber Company with a guard keeping an eye on them.

Chick signs continue to be extremely popular. Received an email today from a woman in California who had been in the Valley over the weekend. She wanted "Chick" bumper stickers (we don't have any).

A dad from Dallas, TX, emailed to say he had been in Staunton visiting his daughter at Mary Baldwin College and saw the signs. He wanted 50!

The hottest sign of this campaign season in this area has been "I Am Voting For The Chick." Amazing. Hat's off to Tom Sheets.

Email ThisBlogThis!Share to TwitterShare to FacebookShare to Pinterest
Labels: I Am Voting For The Chick, McCain-Palin 2008, Tom Sheets

Your post has better pic then I do. I saw it today and took pic will cell phone. http://yankeephilip.blogspot.com/2008/10/not-great-pic-but-good-subject.html

Tom Sheets is my dad. And I have to say, even as a Democrat (please don't kick me off this site, I am really proud of him for putting the sign back up. Both my parents taught me to speak my mind and have opinoins, which is why they tolerate the whole Democrat thing. A lot of people may find the sign offensive, however, he has the Constitutional right to express that viewpoint. And that is why i am especially proud he is my dad!

Heather, Democrats are welcome here. I don't tolerate nasty language or personal attacks from anyone.

Your dad helped shake things up in the SWAC area with the Chick signs. They helped supplement the McCain-Palin signs and were a way for folks to publicly express their support of Sarah Palin.

I'm a "chick" and I do not find the signs offensive at all. I read on a website where someone joked, "I guess I'm not progressive enough to be offended"!

Thanks for stopping by.