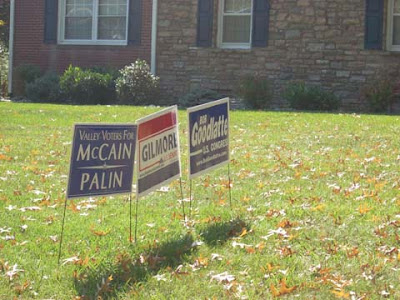 Just got a call from a Republican volunteer who woke this morning to an empty front yard ... a yard where four signs had been the day before: McCain-Palin, Gilmore, Goodlatte, and Win the War.

Someone had stolen them during the night, something that had never happened to her before especially since she lives in a Stuarts Draft neighborhood and is not on a main thoroughfare. Her husband noted that all Republican yard signs along their (very long) street had been stolen last night.

The sign that hurt the most to lose, she said, was the Win the War sign, one I had given her in 2007 and that had been proudly displayed in her yard since that time.

This campaign seems to have more shenanigans at the local level than any election I've worked the past nine years. It was first noticed in the 2001 Mark Earley-Mark Warner gubernatorial campaign and has escalated in the years since ... but this year the amount of stolen signs is more than I ever remember hearing about as volunteers call in with information from throughout Augusta County.

Dirty tricks from the opposition ... brace yourself for Election Day.