Birthday greetings for a gentle friend 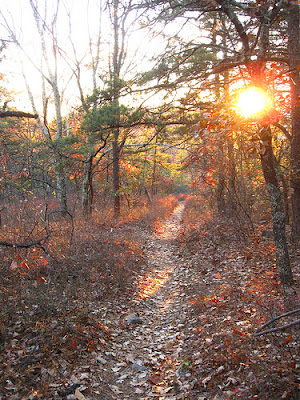 Shenandoah National Park hiking trail.
Photo by Bob (The Journey).
"Climb the mountains and get their good tidings. Nature's peace will flow into you as sunshine flows into trees. The winds will blow their freshness into you, and the storms their energy, while cares will drop off like falling leaves." - John Muir
Today is the birthday of a good friend so I spent my early morning hours looking back over his posts at The Journey, reliving the trails he has hiked and the areas he has visited and his words of wisdom in the weekly Thyme Magazine.

Bob's window on the world takes me to new heights and destinations and I rejoice in his pleasure of photographing a butterfly on a purple thistle in August or the sun's rays on Elliott's Knob on a winter morning or the changing colors in Shenandoah National Park.

Bob and I first crossed paths as fellow home school parents 14 years ago. A Christian, husband to an amazing lady, father of two, artist, architectural renderer, nature photographer, and well-read man, he has an indepth understanding of the land around us and the political unsettleness of the world that some may miss in his quiet gentleness.

In 2000, as I worked Bush for President headquarters in Staunton, Bob came in with a pencil drawing of Osama bin Laden as a rat. At that time, most people had no idea who Osama bin Laden was but Bob knew. I taped that drawing to the wall by my desk and, after the successful election was over, packed it away with my political treasures. Less than a year later, America became very aware of bin Laden after the tragic 9/11 terrorist attacks on our country.

In 2004, as I unpacked the office supplies to once again set up headquarters for President Bush's reelection campaign, out came the pencil drawing of bin Laden-Rat that Bob had drawn four years earlier. When he stopped by headquarters, he spotted it once again on the wall beside my desk.

Some years back when I expressed disappointment on my blog at the eyesore that is now Afton Mountain, Bob, who is a fellow SWAC area blogger, came up with a vision of what it could look like with architectural drawings of a vibrant Gateway to the Shenandoah Valley. Even now, his vision lives in my mind as I dream that some day that area will become the beautiful mountain setting befitting the apex of the Skyline Drive and Blue Ridge Parkway.

Last week, while eating lunch with a friend in a downtown Waynesboro restaurant, I spied Bob coming up the sidewalk across the street and grabbed my camera for a quick photo. He later used the photo in his blog as he explained his part in revitalizing that area of the Valley.

Often found in his studio with its own window on the beautiful Augusta County countryside, Bob sometimes gets lost in the joy of his work. For our sake, I'm glad because we've become the richer for his willingness to share what has often been inspirational and unforgettable.

Happy Birthday, my friend. Here's wishing you many more years looking at God's world and bringing that beauty to us through photos and words.