Remembering the passengers and crew of United Flight 93 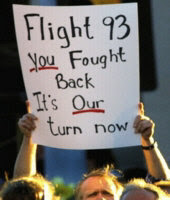 Ten years ago on September 11, 2001 ... the forty passengers and crew members of United Flight 93 perished into a field near Shanksville, Pennsylvania, when terrorists were overtaken by heroes to prevent an attack in Washington, DC, on the Capitol or White House.

There was one more innocent life lost that day. Passenger Lauren Catuzzi Grandcolas was expecting a child ... that child is remembered ... 40 (+1).

The Flight 93 names were read at the beginning of the Flight 93 National Memorial dedication ceremony.

After the reading of the names, a piper played "Faith of Our Fathers" on the bagpipes as he walked along the Flight 93 memorial, and then merged into "Amazing Grace" against a backdrop of wildflowers in the rural Pennsylvania countryside. As he reverently made his way through the crowd, the strains of "Amazing Grace" faded away....