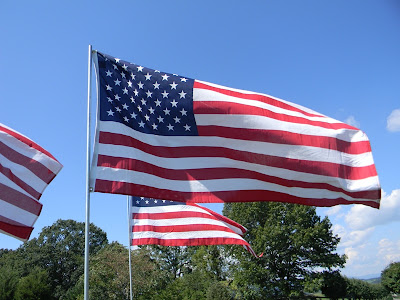 Our American flags today against a blue sky that looked just as it did ten years ago
on September 11, 2001.
The tragic events of 9/11 were life-changing for millions, and I was no exception. Life became more urgent after the events of that day, and the years since have been spent helping those who would protect this country. Even now, ten years later, I can become overcome with emotion.

When the White House was evacuated on that fateful day, my sister, a member of President George W. Bush's communications team, was one of those who took off their shoes and ran for their lives as United Flight 93 approached the nation's capital.

My husband and I were vacationing in Colonial Williamsburg with our two teenage children when a Colonial interpreter told us of the World Trade Center and Pentagon attacks. I immediately stepped aside to call my mom in Richmond to see if she had heard from my sister. Amazingly, perhaps because her Austin cell phone was still routing through Texas, my sister was able to call and reassure my  mom that she was okay even as tens of thousands of others encountered jammed phone lines. The White House had been evacuated and stand-still traffic made escaping the nation's capital a nightmare. Hours later, she made it home and then waited to hear from her next-door neighbor who worked at the Pentagon. She later learned he had fled his office leaving phone and keys behind at his desk, and had walked home from D.C. to Bethesda. My sister has barely talked about that day ... it's still too raw ... but I am forever grateful to the heroes of Flight 93 who prevented a tragedy at the Capitol or White House.

Our much-anticipated Williamsburg vacation suddenly took a strange turn on that Tuesday, and all I could think of was going home. Tears flowed easily ... I was in touch with family and friends ... a patriotic, defensive streak came out in Americans who were ready to fight to defend the homeland. We were glued to the TV for updates.

With two children , however, who had looked forward to our planned visit to Busch Gardens Amusement Park on Friday, we made the decision to stay the remaining four days of our trip. We tried to make it as normal as possible for them although we stayed on high alert, never far from a news report, wondering along with the rest of the country if there was more to come.

For the first time, our backpacks were searched as we entered Busch Gardens. Little did we know it was the beginning of a new normal that was to expand and necessarily intrude in the years to come. At noon, the park ceased operation for a time of remembrance. Patrons lined the pathways and held hands as all bowed their heads in prayer, then listened to and sang along with Lee Greenwood's "God Bless the USA" as it played over the park's intercom system. Tears streamed down the faces of strangers standing shoulder-to-shoulder who came together that week as Americans.

Afterward, as our kids headed for the roller coasters, we worried about snipers in such a high profile area. It was, after all, only four days since the terrorist plane attacks and all were aware that more terror could be planned. The day, however, was uneventful, and we headed home the next morning.

One memory that sticks in my mind is the sheer number of American flags waving after 9/11 on vehicles, on store fronts, on houses ... I had never seen so many flags flying in the USA. At home I had dozens of American flags but none with me on our trip, and when we checked at Williamsburg shops for anything red, white, and blue, everything was sold out. I was aching for a flag....

Back in the Shenandoah Valley, we were in church Sunday morning as a sanctuary packed with friends and strangers sought comforting words even as tears streamed down many faces. The most important thing of all was that we were home.

In the days, months, and years after 9/11, I held my children tighter ... my husband and I lingered in conversations a bit longer ... family and friends were dear and I pulled them close. The events on 9/11 reiterated the importance of those around us.

As America went to war to avenge the 3,000 innocent souls murdered on 9/11, we held Support the Troops rallies to show our public gratitude to our men and women in uniform who were protecting not only the United States but also our freedoms. We recognized our First Responders, the front line of America's defense. For almost ten years we have said good-bye to those going to war ... and embraced those who returned. We watched close family friends leave for battle and prayed for their safety.

We have grieved with military families who lost loved ones in Iraq and Afghanistan, and flown American flags in their honor. Yellow ribbons have adorned our yards. We've sent packages to troops in harm's way and embraced their families at home.

I volunteered long hours on campaigns of political candidates who were strong on national security. In the middle of a war on terrorism, it was comforting to have a no-nonsense leader like President George W. Bush whose first priority was the safety of the American people.

The feelings of 9/11 have not faded for me. I've joined others with a 9/12 determination as the American spirit has survived and thrived after terrorism rocked our country. There's a hope that we will someday return to the unity that temporarily held our nation together after that grim Tuesday in September. Today, a beautiful day much like the one ten years ago, American flags wave at our house and we pray for all who lost loved ones on 9/11 and at war in the years since.

Email ThisBlogThis!Share to TwitterShare to FacebookShare to Pinterest
Labels: 9/11, may we never forget, war on terrorism