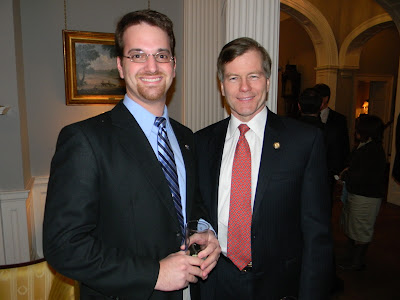 Looking back at Bloggers Day 2011 ... David Karaffa and Governor Bob McDonnell at the Executive Mansion in Richmond. David had just begun his campaign for supervisor in Augusta County, a journey that took him to victory in November 2011.

David put his campaign bumper sticker on his vehicle in 2011. Photo by Bob Kirchman. 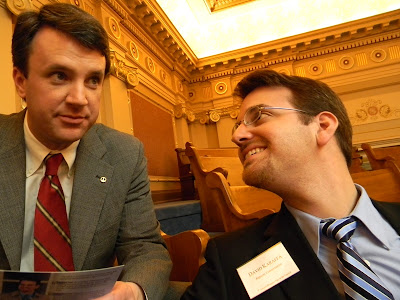 Delegate Ben Cline and David Karaffa in the Virginia State Capitol during session 2011. 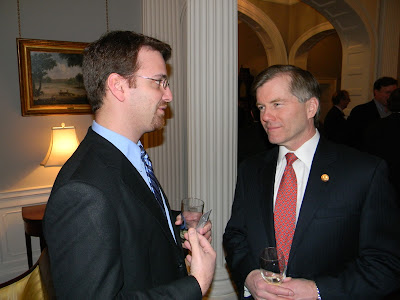 David Karaffa did not naively stumble into politics. Growing up in a large family, there were lively discussions around the dinner table about current events and all the children were encouraged to participate and offer reasoned responses, defending their opinions with facts. His grandparents played a big part in making sure he offered rational answers and, even today, talk with him about issues facing the area.

When issues came up with the previous Augusta County Board of Supervisors who made decisions questioned by thousands of residents, David decided not to just sit on the sidelines and complain. He decided to run for public office.

David, 28, is an example of the up-and-coming generation that is working for the future of all citizens not just in Augusta but throughout Virginia and beyond. Elected as Beverley Manor supervisor in November 2011, he hit the ground running, listening to citizens and his fellow supervisors, and to those who were able to offer information necessary to help with decisions concerning current issues facing this board.

The board saw a turnover in 2011 with five new members taking their seats along with two veterans. David, as the youngest member, provides a new perspective, one reason his campaign team was made up of so many citizens who liked what he stood for.

David Karaffa ... husband, father, cardiac RN, son, brother, grandson, nephew, county supervisor. With a large extended family throughout Augusta and Staunton, he has their support and the solid foundation that comes with that. Three months into the job, the future looks bright for this young man.