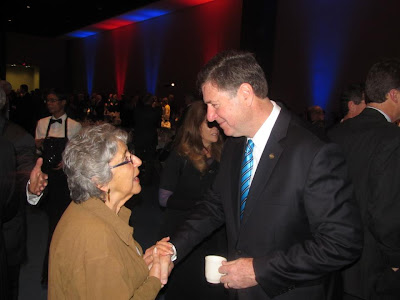 George Allen talks with a supporter at Friday's Erica Cantor breakfast in Richmond.
Republican U.S. Senate candidate George Allen was front and center in Richmond Friday morning at Congressman Eric Cantor's annual fundraising breakfast, emceeing the program and visiting with supporters much as he did at last year's breakfast.

Each year, as in 2010, the Richmond Convention Center ballroom is filled with 1,000 people to support Eric Cantor and his colleagues. This year a whopping 1,800 supporters turned out including some of the most recognizable names in the business community.

Had a great time emceeing the Cantor for Congress Annual Campaign Breakfast in Richmond with Eric Cantor and Marco Rubio! Everyone emphasized a positive vision for the future with pro-jobs-growth ideas to reinvigorate the economy and make America competitive again!