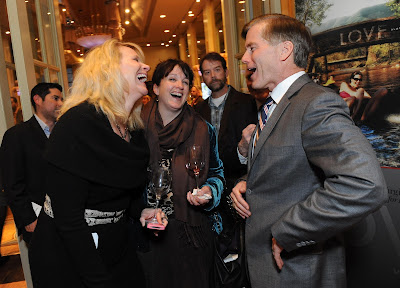 SAN FRANCISCO – Governor Bob McDonnell welcomed top wine and travel journalists and industry leaders at a special event March 27 in San Francisco to promote Virginia’s wine, tourism and film industries. The event showcased 12 wines which medaled in the newly revamped Virginia Governor’s Cup Competition along with several Virginia wines and foods which are distributed in the San Francisco Bay area.  The event marked the first time the Virginia Governor’s Cup winning wines were featured outside of Virginia.


“We were honored to bring these award-winning wines to the West Coast as part of our administration’s efforts to grow the Virginia wine industry, promote tourism, and encourage film and production in Virginia,” said Governor McDonnell.  “The growth of these industries is key to keeping Virginia’s economy strong and providing good, quality jobs for Virginians.”


Raising the profile of Virginia wines and wine tourism are key components of the governor's economic development and jobs creation initiatives. The governor has promoted Virginia wines at the Virginia Executive Mansion and throughout Virginia, on other domestic business recruitment visits, and on international trade and marketing missions to India, Israel, and countries in Europe and Asia. First Lady Maureen McDonnell has also incorporated wine and wine tourism promotions into her First Lady Initiative Team Effort or FLITE.


“I admire Governor McDonnell's continuing commitment to promoting Virginia wine by doing so on the doorstep of California wine country,” said Bartholomew Broadbent, proprietor of Broadbent Selections, Inc., a global wine importer/distributor with operations in Virginia and California. “San Francisco has always been a very accepting, cosmopolitan wine market where wines from around the world earn their place in American hierarchy.”


Virginia is home to more than 200 wineries statewide and is fifth in the nation for wine grape production.  A newly released economic impact study shows that Virginia's burgeoning wine industry contributes almost three-quarters of a billion dollars - or $747 million - annually to Virginia's economy.  Virginia wineries and vineyards support 4,800 jobs that provide $156 million total in wages.


“Last night’s event and related meetings in California are important steps in the governor’s strategic initiative to make Virginia the premiere East Coast destination for wine and wine tourism,” said Secretary of Agriculture and Forestry Todd Haymore. “In addition to work done already in key domestic markets such as Washington, DC, New York and Chicago, the time is right to look at San Francisco, one of the most influential wine centers in the United States, to expand the reach of the Virginia wine industry.”


Tourism is an instant revenue generator for Virginia.  In 2010 tourism generated $19 billion in revenue, supported 204,000 jobs and provided $1.2 billion in state and local taxes.  Virginia is eighth in the nation for domestic visitor spending.


The Virginia Film Office is part of the state’s tourism office and has had recent success luring major motion pictures to Virginia as a result investments by Governor McDonnell and the General Assembly for the Governor’s Motion Picture Opportunity Fund.  The production of Steven Spielberg’s biopic Lincoln, which was filmed 100 percent in Virginia, had an estimated $35 million economic impact for Virginia.  The direct and indirect impact of Virginia's motion picture and video production industry in 2009 was $346 million, representing 2,700 jobs for the state.


Visit www.Virginia.org to learn more about wine travel and other destinations across the state or call 1-800-VISITVA to request a free, Virginia is for Lovers travel guide.  Visit www.VirginiaWine.org to get more information on Virginia wines including wineries, varietals and special events statewide.
Posted by Lynn R. Mitchell at 3/28/2012 09:31:00 PM