Back in the homeschool classroom: Constitutional lessons & the Judicial branch of government 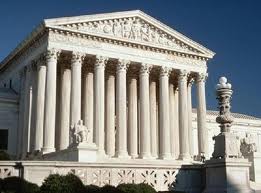 The liberty and freedom to educate our children at home made it possible to be sure they understood some issues that sometimes slipped through the cracks in public schools.

This week's historic Supreme Court hearings on what is commonly known as ObamaCare is an excellent teaching opportunity for Americans and, most especially, American students. How many classrooms will dedicate time to this vitally important issue that will have an affect on generations to come?

Is federal power unlimited? Those who believe in limited government absolutely disagree with that and, yet, there are many Americans who want government to be in charge of their health care. The Supreme Court must now decide.

The Wall Street Journal sounded the alarm in their editorial:


Few legal cases in the modern era are as consequential, or as defining, as the challenges to the Patient Protection and Affordable Care Act that the Supreme Court hears beginning Monday. The powers that the Obama Administration is claiming change the structure of the American government as it has existed for 225 years. Thus has the health-care law provoked an unprecedented and unnecessary constitutional showdown that endangers individual liberty.

Today presented an opportunity to tune into C-SPAN to hear caller opinions and to watch as Americans lined up in front of the Supreme Court building hoping to receive one of the 150 coveted tickets for a public seat to listen to the proceedings.

Does this law fundamentally change the relationship between the American people and the federal government? There's widespread agreement that health care in America needs to be reformed ... but is this the way to go about it?

In 2009, close to a million American citizens marched on Washington, DC, to express their objection with ObamaCare that was, at that time, being debated in Congress. It was eventually passed by a Democratically-controlled Senate and a Democratically-controlled House under the control of a Democratic White House. I posted about the 9/12 March on DC complete with photos of that historic day when the sleeping dragon was awakened and the American people came out of their decades-long slumber.