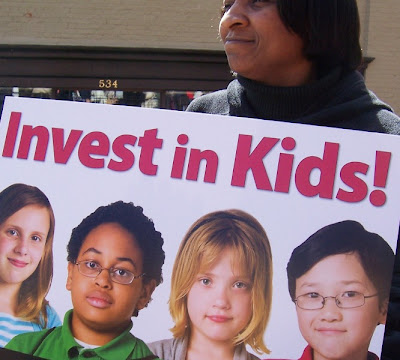 They've gone four years without raises and weathered years of budget cuts but Virginia public school teachers continue to work hard to educate their students. On Saturday those educators -- now facing layoffs and further cutbacks -- joined hundreds of their colleagues in Virginia Beach and Roanoke and rallied on the Downtown Charlottesville Mall to send a message to state legislators: Fund public schools. 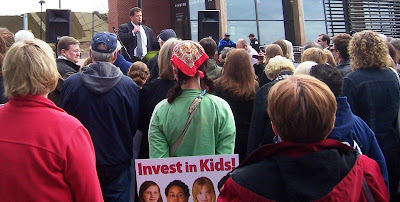 Augusta County school teacher Kurt Michael joined his fellow educators at the "Wake for Education" rally. I talked with Dr. Michael on the phone shortly afterward, and he gave me an update and shared some photos. He said he caught up with about a dozen Augusta County "Support Our Schools" (SOS) members -- a grassroots organization that sprang up in Augusta County when there were threats to close two schools. They were joined by a hundred other participants -- teachers, parents, students, and supporters -- wearing lapel stickers saying, "I Am Education," and carrying a variety of signs and banners asking to "Invest in Kids!" 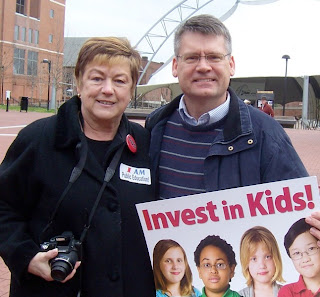 Karen Olivares, VEA regional director, and Dr. Kurt Michael, Augusta County school teacher.
The rally, held in front of the Freedom of Speech Wall, featured a number of speakers, some who gave testimony expressing how teachers had a positive influence on their lives. Others talked about cuts in education, teacher contracts, increased health care costs, and the Virginia Retirement System (VRS). They expressed concern and said they understood the bad economy but going after tenure and teacher contracts was not going to improve education. They mentioned the outright hostility of some legislators toward public school teachers and said it was not appreciated. Meanwhile, Virginia teacher salaries have fallen $7,083 behind the national average, the lowest percent since 1965. 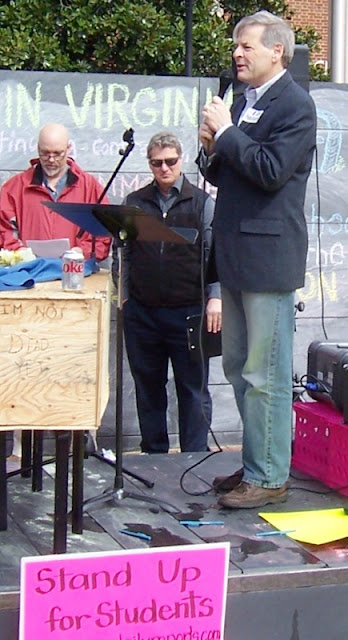 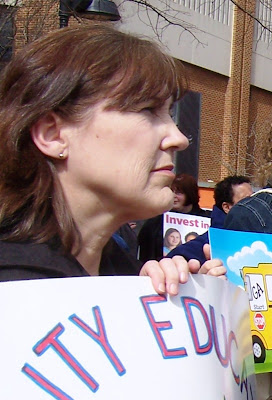 Part of the problem with the budget shortfall appears to stem from the underfunding of the Virginia State Retirement Fund that provides benefits for not only teachers but also police officers, firefighters, and state employees.  With VRS underfunded by $20 billion, local governments across the Commonwealth have been asked to help make up the shortfall, pushing some budget talks almost to the breaking point.

Augusta County Supervisor Marshall Pattie addressed the issue at the February 22 supervisor meeting that was packed with over 400 SOS supporters who came out to the Government Center to ask supervisors to help fund the school budget. In a PowerPoint presentation, Pattie stated, as noted on his website:


"... last year, our state legislators voted to borrow $620 million from the underfunded retirement plan.  At the end of that fiscal year these same officials celebrated a 'surplus' of $545 million dollars. Rather than restoring this 'surplus' to the pension plan it was redistributed as if it were simply 'found money.' "

For the last four years in Augusta County, the schools have made $15 million in severe cutbacks and now, still without all the necessary funds, the school system has had to let some teachers and aides go. Trying to find solutions, supervisors and school board members hand-delivered a letter to local state representatives in Richmond to ask for help and called on them “to work collectively with the governor and your peers in the General Assembly to reduce or eliminate the proposed VRS increase for schools.”