9/12 March on DC ... America went to Washington to protest ObamaCare 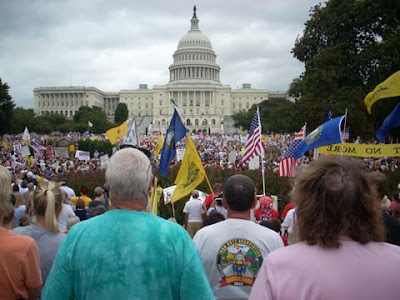 Our view of the 9/12 Rally from where we stood.


From September 13, 2009, when the proposed ObamaCare law caused hundreds of thousands to march on Washington, DC....

The 9/12 March on Washington was a huge success! The number of marchers overwhelmed the start-up location at Freedom Plaza Saturday morning, spilling out into the adjoining streets as thousands gathered to walk Pennsylvania Avenue to the Capitol. The parade, scheduled to begin at 11:30 a.m., had to start early at 10:00 to clear out the congested area.

It was an honor to be with so many like-minded patriots ... and humbling ... and it made me proud to be an American. It was democracy in action from a group of people who normally go about their lives -- working, raising their children -- and do not spend time marching and protesting.

That changed Saturday as thousands upon thousands of conservative citizens took part in the mile-long march down Pennsylvania Avenue to the Capitol. To see so many people was breath-taking, an emotional experience for many who thought they would never see that many conservatives in one place at one time. It was a sea of faces, flags, signs ... young, old, short, tall, all shapes and sizes, some on walkers or canes ... it was the face of America.

The Shenandoah Valley was represented by over 200 residents in the march. Fellow SWAC bloggers Bob from The Journey and David from Augusta Conservative also documented the event.

As marchers arrived at the Capitol, they found places to stand or sit and listen to speakers who were addressing the thousands already in place. We found an excellent vantage point at the Grant statue with a direct view of the Capitol. Our group camped out there, rotating in and out as we explored the crowds, took photos, and talked with people who felt more like friends than strangers.

The crowd was extremely courteous. If taking a photo, people would duck below the camera, stop, or walk around. Everyone smiled and was friendly. It was not an angry mob ... it was a friendly group who was frustrated that they had not been heard and, after many of their Congressional representatives refused to hold townhall meetings in August to hear their concerns, they wanted their voices to be heard. Their frustration led them to Washington, DC.

Fellow SWACer Barb and I roamed the crowd with our cameras -- I took over 600 photos -- and for a while we stood in front of the Capitol watching the marchers continue walking by (this was an hour after we had gotten there and they were still marching). I will never forget one older gentleman who came walking along. He was slightly bent over and pushing a walker -- one of those on wheels with a seat in it -- as he kind of shuffled along ... shuffled ... with a determined look on his face. He was an inspiration.

SWAC Daughter and Alex, both 21, were eyewitnesses to this historic event and I am proud of them for wanting to be a part of it as well as the thousands of others their age. Barb and I stopped one young man from Florida to get a photo of his sign, and thanked him for traveling so far for the cause.

With so many people there, it was quite a coincidence to run into a couple of people we knew ... similar to finding a needle in a haystack. As we approached Pennsylvania Avenue, one of the home school graduates from Augusta County passed us on the sidewalk. We marveled that we had seen each other and I snapped her picture "as proof I saw you!"

Later, while sitting in front of the Capitol listening to speakers, SWAC Husband called my attention to a young man who had made his way onto the statue beside us to get an overhead photo of the huge crowd around the Capitol. It was my son's James Madison University friend from NJ, the friend he had visited a few weeks ago when they spent the weekend exploring New York City. We knew this friend was planning to attend the march ... we had no idea that, out of all those people, we would actually see him! He waved from his perch and I got his picture, then texted my son with the news. Absolutely amazing!

When not roaming the crowd, I had notebook on lap taking notes of speakers, the crowd's reactions, chants, and people around me. One lady who scooted in next to me was from Connecticut. Three ladies found a quiet spot in the ornamental bushes around the statue, still holding their signs but grabbing a bite to eat. They laughed when I mentioned their private alcove and took their photo.

The stories are many ... the two gentlemen holding a 10-foot-long yellow banner between two poles that said, "SILENT NO MORE" ... the hundreds of chartered buses making their way into DC with loads of passengers for the rally ... the Augusta County resident in a wheelchair who was deteremined to be there, and his friend who helped push him around ...

... the Staunton city business owner, an Operation Iraqi Freedom veteran, who closed his shop on Saturday, his busiest day of the week, so he and his employee could attend the march ... the man from Houston, Texas, who flew to Virginia to stay with his Augusta County friends so he could ride the bus to the March on Washington ... the gentleman from Holland who is in the process of becoming a naturalized citizen ...

... the dentist, doctor, and RN on our bus from the Shenandoah Valley who are concerned about nationalized health care ... the many, many military veterans ... the college students....

There is something going on in America. Yesterday we made history. Will conservatives continue the fight to stop nationalized health care, government bailouts of private industry, taxation out of control, and more?

One more thing: When those thousands of people left the Capitol at the end of the day, there was no trash! It was a topic on the bus ride home and the Park Service people have to have taken notice what a responsible crowd there was in Washington on Saturday.


I have more photos to post and notes to write up from speakers and links to fellow bloggers' posts....