Thoughts on a Saturday morning 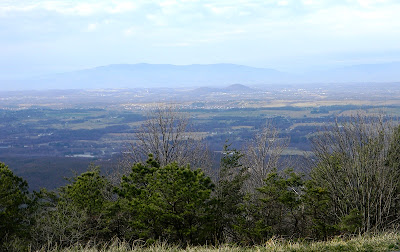 Looking west across the Shenandoah Valley from Shenandoah National Park.
Thoughts on a Saturday morning....

Prayers to our fellow Americans to the west who suffered yesterday through another round of tornadoes, perhaps the worst in U.S. history. Outbreaks in Alabama, Indiana, Kentucky, and Tennessee have left 31 people dead -- don't be surprised to see that number grow -- and massive, widespread destruction. The town of Henryville, IN, was almost completely destroyed. Recovery efforts continue today to find survivors, victims, and begin the cleanup. Jim Cantore is twittering on site.

Bearing Drift's headlines are up this morning. Scroll to the bottom of the page to see all the latest news rounded up by Jim Hoeft.

The 2012 Highland Maple Festival  will be held two weekends: March 10-11 and March 17-18. Enjoy the clear mountain air and back roads in Virginia's "Little Switzerland" while taking in maple products and a slow-down pace. Photos of last year's festival are here.

Majority Leader Eric Cantor's annual fundraising breakfast at the Richmond Convention Center was a smashing success, bringing out 1,800 supporters this year. The featured speaker was Florida's U.S. Senator Marco Rubio but the room was full of a who's who of Virginia Republicans including former Governor George Allen, Lt. Governor Bill Bolling, Congressman Robert Hurt, former Congressman Tom Bliley (who formerly served in the seat now held by Cantor), and the usual assortment of lawmakers from across the Commonwealth who are in Richmond for the 2012 General Assembly session. Olympia Meola at the Richmond Times-Dispatch has more.

The "Tebow Bill" to allow homeschool students to have a chance to try out for public school sport was killed in a state senate committee by none other than a Republican. Harry Blevins (R-Chesapeake) sided with the Democrats on the committee to kill the bill. Blevins is a former principal and coach. Can you say conflict of interest?

The priorities of President Barack Obama are exposed in the Sandra Fluke case versus our American soldiers who have been killed in Afghanistan in the wake of accidental Quran burnings. Bearing Drift's Ken Falkenstein reveals that the president has apologized to the president of Afghanistan and called to soothe the feelings of Sandra Fluke who wants citizens to pay for her birth control ... but the family of a U.S. Army soldier from Roanoke who was killed last week, leaving behind a wife and baby son, has not heard a peep from our Commander-in-Chief.

Sad to report that World War II veteran Col. Barfoot has passed away at the age of 92. In 2009 he fought his Henrico County neighborhood to keep a flag pole with an American flag in his yard. The Medal of Honor recipient won the right to fly the flag.

Support Our Schools: In Augusta County, those interested in following news about public school issues can check out the Support Our Schools website and sign the petition asking lawmakers to fund the schools, or "like" their Facebook page to keep up on the latest news.

SWAC Breakfast: Mark your calendars for the next breakfast on Saturday, April 28, at 8:30 a.m. at the Golden Corral in Waynesboro. The guest speaker will be Congressman Bob Goodlatte.