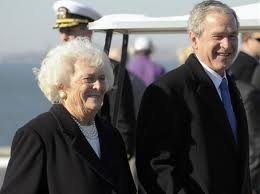 Former First Lady Barbara Bush is one of my favorite political people and part of Team Romney. It's a great help to have her making Get Out The Vote calls leading up to Super Tuesday to rally voters to go to the polls. Got to love the team spirit!

On Monday's The Five on Fox News, host Dana Perino, former press secretary for President George W. Bush, talked with Barbara Bush who said the Romneys had been friends of theirs for years. She expressed sadness at the vitriol in today's politics and said she was tired of hearing people tear down Mitt Romney who is a good man. She praised his business sense and the way he helped save the 2002 Salt Lake City Olympics, and added, "Every time I go into a Staples, I think to myself that Mitt did this."

When Bob Beckel asked about the reports that Romney is "stiff," Mrs. Bush debunked that and noted he is a warm, good, and very likeable man. With her usual feisty, loveable air, Mrs. Bush stood for her candidate who is a friend, and joked back and forth with all the five sitting around the table. I just love her.

She also revealed that Bill Clinton was a favorite with the family especially former Presidents George H.W.  and George W. Bush. The love story between President 41 and Mrs. Bush is legendary ... "Everyone should be so lucky as to be married to someone like George Bush," she said.

The Bush family ... integrity, honor, straight-up honesty, service to country, love of God, love of family ... that is why I continue to admire and respect them all.