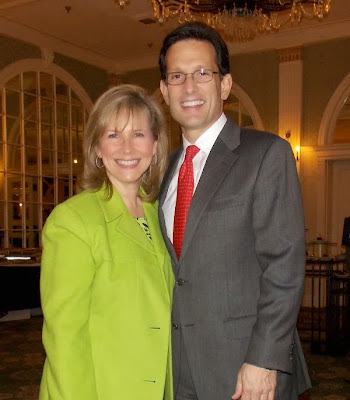 At Saturday's lunch during the Republican Party of Virginia's 2013 Advance, Majority Leader Eric Cantor addressed the crowd of statewide Republicans as he shared his vision for the future of the party both in Virginia and across the country. That vision includes uniting the party around an agenda of conservative solutions that will work to address the problems faced by people every day.


“Over the last four years our party has had some success. In 2009 we witnessed the landslide election of our statewide ticket. Since then, we added Republican seats to our congressional delegation, as well as in the House of Delegates.

“There is no doubt we are facing some very real challenges. Virginia has not voted Republican in the last two Presidential cycles, we’ve lost both seats in the U.S. Senate and the most recent elections for Governor and Lt. Governor. There is no sugar coating this. The last time our party failed to hold any of the 5 statewide offices in Virginia was in 1969, the same year Neil Armstrong walked on the moon.

“The Republican Party is at its strongest when we are united. We simply cannot succeed if we are fractured and if we are not committed to working together. In the end, the differences we may have among ourselves pale in comparison to the differences between our party and the Democrats. We need to be focused on dividing Democrats, not dividing each other.

“Winning elections is about convincing the voters that we have their back, that we’re on their side. If we want to win, we must offer solutions to problems that people face every day. We have not done this recently and it has allowed Democrats to take power, it has allowed them to push their partisan politics, and even worse to enact their leftist agenda.

“President Obama has been leading our country in a direction of dysfunction. He’s grown the national debt, he's grown the number of powerful bureaucrats as well as the number of people who depend on the federal government. Like most Democrats, Barack Obama trusts government over people. His actions defy his rhetoric of hope and change, and deny any chance of a real economic recovery.

“We have a built in advantage. Our conservative solutions actually work to address the problems people face every day. If we focus on them and use them to broaden our appeal, we can provide answers for everybody – not just conservatives like us, but to independents, and the many disenchanted Democrats who feel they’ve been betrayed by their party and their President. If we do this we can start to grow our party again.