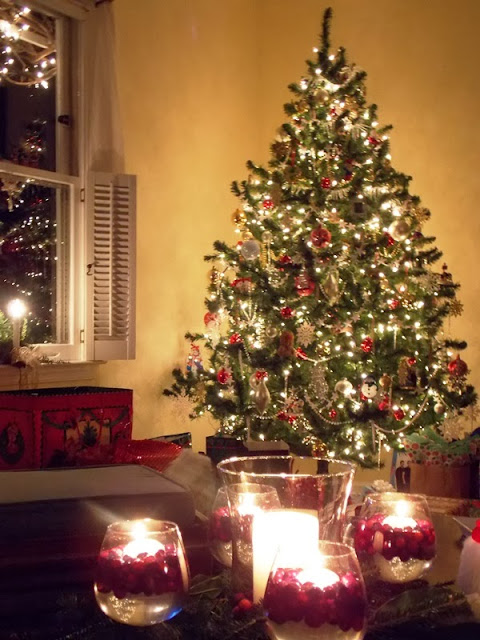 A quiet New Year's Eve in front of the Christmas tree with the candles burning.

It's the last day of 2013 and I'm sitting in my pajamas in front of the television with the laptop on my lap as I switch back and forth between football games and a sappy Hallmark Channel Christmas movie I've seen fifty times. The Christmas tree lights are on as are the electric candles in the windows, and I'm surrounded by Christmas decor. The wax candles are flickering on the coffee table, and outdoor lights illuminate the dark December night.

We're staying home this New Year's Eve and I couldn't be happier.

Yes, we received invitations to go out and ring in the new year in style and decked out in Staunton, or a casual evening with friends in the county. However, we decided to spend this New Year's Eve together at home in the quiet glow of Christmas lights.

It's been a busy year at our house with yard work and tree pruning and leaves to rake and grass to cut and fence repairs and firewood to split and stack.

The past two months we've concentrated on the interior of our dated 20-year-old house, spiffing up our empty nest, if you will. With the kids now gone, it's back to SWAC Husband and me but it's taken a year to actually get used to the fact that it's once again just the two of us. SWAC Daughter married in 2012 and moved first to Charlotte, and then to Nashville. SWAC Son, who had moved out six years ago after graduating college and getting a job, bought his own house in 2013. Yep, we're definitely on our own.

Years of entertaining friends, children, teenagers, and a cat that ruled the roost had taken its toll on carpet, paint, and general wear-and-tear. We were living in the Velveteen House which looked much like the poor, worn Velveteen Rabbit of the children's storybook fame -- almost loved to death. Our minor touch-ups were no longer sufficient ... it was time for a face lift.

And so we spent November and December working on Stage One of our project -- replacing worn carpet, and painting walls and trim. It never ceases to amaze me how much a coat of paint can transform a house. With the choices of Homestead Resort colors through Lowe's Valspar line, we're surrounded with the ambiance -- at least on the walls -- of that stately resort in Hot Springs.

In typical DIY style, we told the carpet store we would remove the old carpet and dispose of it, having no idea how much work we had committed to. We quickly found out. Boy, did we find out.

First everything had to be moved from the rooms being carpeted, and I do mean everything. SWAC Husband hauled most of it to the downstairs level -- books out of book shelves, beds, dressers, desks, office equipment, and everything else. That was followed by him doing most of the carpet removal work while I was painting (to avoid having to paint after the new carpet had been installed). Old padding had originally been put down by a slap-happy installer who literally punched hundreds of staples into the sub-flooring, and each one had to be removed which was extremely time-consuming. SWAC Husband cut the carpet into four-foot-wide swaths to prevent having too heavy a load to carry, rolled it up, and taped it with duct tape. Our neighbor offered to drive it to the dump in his pickup truck so he and SWAC Husband made that trip which saved us hundreds of dollars. We save a bundle by removing the old carpet, too.

Meanwhile, I was enjoying my adventure in painting augmented by SWAC Husband helping at ceiling level. While painting trim is a pain in the behind, I can get into a kind of zen zone while slowly working my way along the miles of wood. Miles, did I say miles? Well, it seemed like it at the time but it was an opportunity to let my mind think about things. While my hand slowly painted, my brain was going a mile a minute.

After the carpet was removed, we took the vacuum to all the dirt, dust, and trash that was found beneath the original carpet. Would you believe there were cigarette butts, cellophane wrappers, nails, plops of plaster (we assumed it had fallen from the ceiling during the building process), and other trash? By the time the installers came with the new carpet, the floor was as clean as new wood. They were able to complete their work in a day, and then we began moving furniture back up the stairs.

We finished painting what couldn't get done before the new carpet arrived and then pictures had to go back on the walls as well as furniture arranged in new ways to maximize space. It doesn't sound like much as I type about it but furniture placement and hanging pictures takes some thought which takes time. Should it go here, or would it look better there?

To complete the cleaning process, we washed all the curtains, comforters, blankets, pillows, bedspreads, and sofa cushions. Anything that was upholstered was cleaned.

And while all this was going on, we went on three road trips: four days to Richmond for Thanksgiving, three days to the Homestead Resort for the Republican Advance, and four days to Nashville to visit our daughter and son-in-law at their new residence.

On top of all that, we needed to decorate inside for Christmas plus put up the outdoor lights. Plus put up and decorate the tree. And get out the winter dishes, plan menus, grocery shop, and let's not forget Christmas shopping!

This all took place while keeping it a secret from everyone except our son who came by to help move the heaviest pieces of furniture. Everyone else would see the results when they arrived for Christmas.

So the past two months have been busy. Tonight we're vegging. And I'm not even the least bit inclined to regret not going out to celebrate the new year. I've already celebrated with my family being here for Christmas in our almost-new-feeling house. My laptop and I have had a day-long date after a week apart, my brain has been spilling out all the thoughts and ideas that were stored up the past week, and I'm enjoying the fruit of our labors.

So as we end this New Year's Eve, I've got to say 2013 was a pretty awesome year and I'm looking forward to 2014 being even better. I hope your New Year's Eve is just as enjoyable, whatever you're doing, and wish you a fabulous and prosperous 2014 as we all continue our life's journeys.