In 1897, eight-year-old Virginia O'Hanlon asked her father if there was really a Santa Claus. He suggested she write to The Sun, a prominent New York newspaper, because, as he said, "If you see it in The Sun, it's so."

And so Virginia wrote her letter: 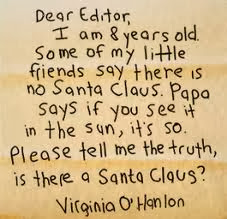 The letter landed on the desk of editor Francis Church, a former war correspondence during the Civil War. Perhaps his observations of the hopelessness during that tragic time in American history made him want to install hope and faith in this little girl. He responded in an editorial that was published in The Sun:


Yes, Virginia, there is a Santa Claus. He exists as certainly as love and generosity and devotion exist, and you know that they abound and give to your life its highest beauty and joy.

Alas! how dreary would be the world if there were no Santa Claus! . . . You tear apart the baby's rattle and see what makes the noise inside, but there is a veil covering the unseen world, which not the strongest man, or even the united strength of all the strongest men that ever lived, could tear apart. Only faith, fancy, poetry, love, romance, can picture the supernal beauty and glory beyond. Is it all real?

Ah, Virginia, in all this world there is nothing else so real and abiding. No Santa Claus! Thank God! He lives, and he lives forever — a thousand times ten thousand, he will continue to make glad the heart of childhood.