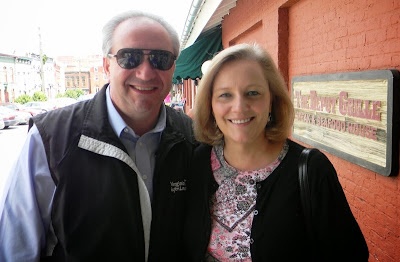 He's been lieutenant governor of the Commonwealth for the past eight years, and served in the State Senate for ten years before that. Bill Bolling has been a dedicated servant to the people of Virginia and, in another ten days, he will step out of the spotlight. For a little while. As the old saying goes, keep your powder dry, Lieutenant Governor.

Reporter Jim Nolen with the Richmond Times-Dispatch did a nice profile article about the LG, catching up with him on the banks of the Rose River where he was enjoying one of his favorite pastimes -- fly fishing. Taking in the solace that many of us find in the Old Dominion, his joy of the outdoors was reflected in what Nolen wrote:


Within five minutes, and without any fanfare, Bolling reels in two impressive rainbow trout. He admires each of them for a moment, before gently unhooking them and returning them to the cold water.

“It’s become my getaway spot — a place that I can go and get away from everything,” Bolling said of the Rose River, in Madison County below Old Rag Mountain. “The time I spend there is therapeutic. It helps me clear my head, and the trout never talk back or disagree with me!”

After the past two years of turmoil in state politics that saw Bolling squeezed out by a Republican Party that left him, not the other way around, this LG has earned some time off. Hopefully, it won't be for long since his conservative leadership is needed now more than ever after every statewide office has flipped to the Democrats, as noted by reporter Shawn Day at the Virginian Pilot.

Through the mud-slinging, accusations, and betrayals, Bolling's humor has stayed intact even if at times it has frayed a bit. The down-to-earth LG whose values match those of most conservatives believes in governing in a more pragmatic, reach-across-the-aisle manner than that of the flame throwers. The November elections proved one thing: people didn't necessarily want a flame thrower in the Top Spot. Meanwhile, Lieutenant Governor Bolling continues to hold the respect of business leaders and grassroots supporters throughout the Commonwealth which again leads to these four words of advice: Keep your powder dry.