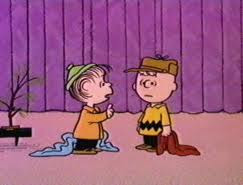 A Charlie Brown Christmas first aired on December 9, 1965, and became a classic that still rings true more than forty-five years later. One reason it remains among the most popular Christmas shows of the season may be because friend Linus reminds Charlie Brown of the true meaning of Christmas by reciting the King James Bible New Testament verses from Luke 2:8-14 describing the birth of Christ.

The fact that the message is delivered by an animated character doesn't diminish the impact of the meaning.

Interestingly, the story goes that network executives did not want the scripture quoted in an animated show, assuming viewers would become bored. Charlie Brown creator Charles Schulz, however, was adamant that it remain. "If we don't tell the true meaning of Christmas, who will?" he asked.

Today, even more than in 1965, we need to hear the true meaning of Christmas as told by a little animated boy in a scene that is beloved by millions.


"And there were in the same country shepherds abiding in the field, keeping watch over their flock by night. And, lo, the angel of the Lord came upon them, and the glory of the Lord shone round about them: and they were sore afraid. And the angel said unto them, Fear not: for, behold, I bring you tidings of great joy, which shall be to all people. For unto you is born this day in the city of David a Savior, which is Christ the Lord. And this shall be a sign unto you; Ye shall find the babe wrapped in swaddling clothes, lying in a manger. And suddenly there was with the angel a multitude of the heavenly host praising God, and saying, 'Glory to God in the highest, and on earth peace and goodwill towards men.'

"That's what Christmas is all about, Charlie Brown."

How much richer we are for Charles Schulz standing by his principles. Merry Christmas to Charlie Brown, Linus, and the rest of the Peanuts gang!
Posted by Lynn R. Mitchell at 12/24/2013 06:00:00 AM

Email ThisBlogThis!Share to TwitterShare to FacebookShare to Pinterest
Labels: A Charlie Brown Christmas, Christmas, Jesus is the reason for the season, Linus