Merry Christmas and Happy New Year, Stacy ... wherever you are 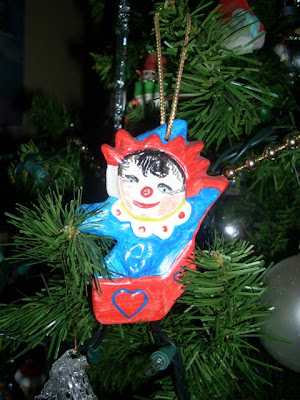 As I was growing up, a tradition in our family was for my parents to give us ornaments each year from places they had traveled. My husband and I continued the tradition with our children ... so we have a number of "special" ornaments that are placed on the tree year after year.

It was a jack-in-the-box painted in 1975 by a 10-year-old boy named Stacy. I held the ornament in my hand and remembered back to the days when, as a young 20-year-old, I worked at Children's Hospital in Richmond.

Stacy touched my heart more than any other child I came in contact with because of his devilish sincerity. I loved that child. He was from southwest Virginia, one of many children from a large, poor Appalachian family. As best I can remember, the accident that changed his life occurred when he was playing cowboys-and-Indians with his siblings and they tied him to a tree, piled leaves at the base of the tree, and set the leaves on fire.

Stacy was horribly burned, so much so that much of both legs and part of one arm had to be amputated. He came to Children's Hospital for months of rehabilitation.

Stacy would now be in his 40s. I don't know what happened to him ... I lost track after leaving Children's Hospital. I have often wondered where he was, how his life turned out, and if he was able to handle the emotional scar of such a life-changing incident so young in his life.

I once again placed his ornament on the tree this year and again wished Stacy a Merry Christmas, wherever he is....