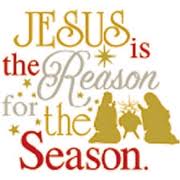 The poignant story of the little boy who saw the children lined up at the mall to see Santa and asked, "Where's the line to see Jesus?" was first sent to me by a friend. Soon after I received more emails with the story and link to the song.

At a time when the war on Christmas continues, a small child's innocent question makes us slow down in the middle of the hustle and bustle of the holidays and think about the true meaning of the season.

Here is the true inspiring story behind the music "Where's the line to see Jesus?"


While at the mall a few years ago, Becky Kelly's then four-year-old nephew, Spencer, saw kids lined up to see Santa Claus.

Having been taught as a toddler that Christmas is the holiday that Christians celebrate the birth of Jesus, he asked his mom, "Where's the line to see Jesus?"

Becky's sister mentioned this to her father, Steve Haupt, who immediately became inspired and jotted some words down to the song in just a few minutes. After putting music to the words, and doing a quick home recording, he received a great response from friends. Her father asked if Becky wanted to record the song to see what could happen with it. Becky listened to the song, made a few changes, and headed to Shock City Studios.

It was at the studio where Chris Loesch, owner and producer, rewrote the second verse and part of the chorus. With goosebumps and emotions high, they all felt like they had something special and recorded the demo in just under two hours.

Two weeks before Christmas last year, her cousins decided to do a quick video to see what we could accomplish on YouTube. The first day it had 3,000 hits and it soared to a million from there! Becky received e-mails, phone calls, Facebook messages from people all over over the world asking for the music, CDs, iTunes, a full version, anything ... they had nothing.

After a couple of meetings with Chris following the amazing response, the team got serious. They headed back into the studio this past spring, this time with guitars, drums, bass, pianos, choirs ... the real deal ... and here it is today.

Getting everything set up, a website put together, and loving that thousands upon thousands of Christians have come together to remember the true meaning of Christmas. Out of the mouths of babes come profound truths that many adults can not understand. Hopefully, Spencer's observation will cause people all over to reflect on the love of Jesus, and that one day we will all stand in line to see Him. Becky is most thankful to our Heavenly Father to have this chance to share her music with you. Merry Christmas, everyone.

About Becky:
Becky Kelley was born and raised in St. Louis, Missouri. She first sang on stage at the ripe age of two and never looked back. Singing and dancing her way through high school, she ended up going to college in Nashville, TN, at David Lipscomb University. It was there when she started to get a taste of the Nashville music scene, singing and performing with some of Nashville's best.

After college, Becky decided to go back home, get married, and settle into a family life. Apparently life had other things in store, as she eventually found herself being pulled back into music, recording in the studio and welcoming an exciting new chapter into her life all while embracing her current life at home. While life has gotten busier, it has also become richer. Becky loves using her gifts both in the professional world and also singing her baby girl to sleep at night, praying God is leading her every step of the way.

Interesting facts:
* A portion of the procedes of CD sales will go to Christian Family Services in St. Louis and the good work they do finding homes for children in need.
* The man playing piano in the video is Becky's father Steve who is also the main writer of the song and is the pianist on both recordings.
* Gloria Estefan's bassist, Jorge Casas, is the basist on this recording.

Email ThisBlogThis!Share to TwitterShare to FacebookShare to Pinterest
Labels: 'Where's the line to see Jesus?', Jesus is the reason for the season