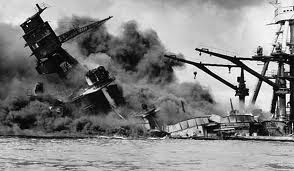 December 7, 1941 ... 72 years ago America suffered the worst attack ever on our soil at the hands of the Japanese who conducted a sneak attack on our Naval base in Hawaii. It was, in the words of President Franklin D. Roosevelt, "a date which will live in infamy."

Or so we thought.

Sixty years later, on September 11, 2001, America came under an even larger attack on our soil and it wasn't on an island in the South Pacific. It was right here on the mainland.  America was attacked in New York City and Pennsylvania and the Pentagon in Washington, D.C. More people died that day than in 1941. The big difference was that they were civilians.

Have Americans forgotten Pearl Harbor? Most who are alive to remember are now in their 70s, 80s, and 90s. Many of the survivors have passed away ... the rest are increasingly in frail health.

How on God's green earth do we expect people to remember Pearl Harbor, an event that happened 72 years ago, when many have already forgotten the terror from 9/11 that occurred just a short 12 years ago? Have Americans lost their resolve? Their will? Their courage? Their honor? Their willingness to stand up for the home front?

Have we forgotten how to pull together in the face of adversity and in the face of the rest of the world? Have we allowed the worldview, politically correct elitists to so tie our hands so that we aren't even willing to stand up anymore for what we believe in?

Roy Martin, former President of the Navy League's Richmond chapter, wrote an historical background to the Pearl Harbor attack in his article, "Pearl Harbor Remembered: Attack pulled the U.S. Into WW II," published in the Richmond Times-Dispatch on 12/6/06, and commented:

"Sadly, too many Americans today don't recognize, much less remember, what happened, nor how it changed our lives, our country, and the world forever."

I believe that statement could also be applied to 9/11.

Eliza Manningham-Buller, former head of the British internal security agency M15, addressed terrorism in a speech in 2006 where she stressed the continued worldwide terrorist threat, and warned that it began well before 9/11/01:


"We now know that the first al-Qaida-related plot against the U.K. was the one we discovered and disrupted in November 2000 in Birmingham. A British citizen is currently serving a long prison sentence for plotting to detonate a large bomb...."

She said M15 knew of 200 terrorist networks consisting of over 1,600 identified individuals who were actively engaged in terrorism throughout the world and added:


"In the years after 9/11, with atrocities taking place in Madrid, Casablanca, Bali, Istanbul, and elsewhere, terrorists plotted to mount a string of attacks in the U.K., but were disrupted. This run of domestic success was interrupted tragically in London in July 2005. Since then, the combined efforts of [British intelligence agencies] have thwarted a further five major conspiracies in the U.K., saving many hundreds (possibly even thousands) of lives...."

But in the U.S. we hear the cynics and doubters who beat the constant negative drum against surveillance of suspected terrorists, against our military, and against America, yet terrorist attacks take place around the world and attempts at destruction continue on American soil.

My parents were part of that World War II greatest generation that stepped forward to defend the homeland in 1941, ordinary Americans who went to war. Many did not return. My mother's brother was killed in France while serving with the U.S. Army. My Navy father was on the USS Wisconsin in the South Pacific. Americans who remained at home did their part with victory gardens, rationing, and rallying the patriotic spirit of the country. Americans as a whole sacrificed for the common good.

The Greatest Generation is now aging ... grandparents who were young men and women during the years of 1941-45 and who are now passing away at the rate of over 1,000 per day. They worked as a team ... they helped preserve freedom for the world.