A look back at Saturday's Winter Wine Festival in Staunton 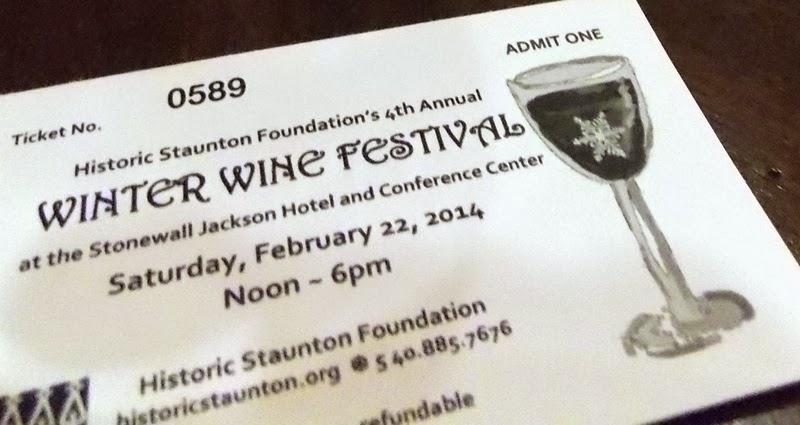 Wine lovers from near and far attended Saturday's Winter Wine Festival at the Stonewall Jackson Hotel and Convention Center from noon until 6:00 p.m. in downtown Staunton. Hosted by the Historic Staunton Foundation, the event drew hundreds of participants and featured a dozen or more local wineries, two breweries, and two cider mills. The Stonewall's ballrooms as well as Sorrell's Lounge were all packed to capacity as attendees tasted and sipped the offerings. After tasting, glasses of wine were available for $5 and bottles were available for sale.

Four friends and I met in the Stonewall's lobby and began our adventure by first filling out the door prize stub and dropping it in a silver bowl, then we took our snowflake-embossed wine glasses in search of friends John and Susan Kiers and their Ox-Eye Vineyards table. 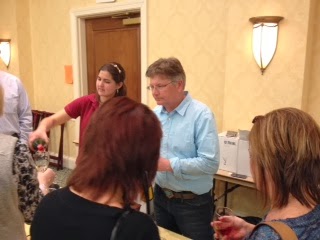 Ox-Eye owner John Kiers was pouring as he described the various selections. White Ox continues to be my favorite followed closely by their Riesling. Ox-Eye has garnered many reviews.

In 2013, Dave McIntyre, wine editor with the Washington Post, included Ox-Eye Vineyard in his list of Top 10 Mid-Atlantic wineries worth exploring, noting, "Southwest of Staunton, also at about 1,800 feet elevation, this vineyard is producing notable Riesling, pinot noir and lemberger, from an Austrian grape also known as blaufrankisch." 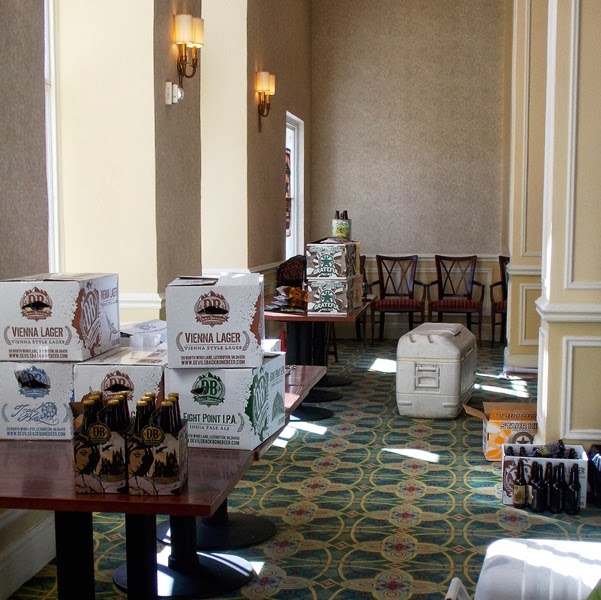 Beer lovers were in luck with the presence of popular Virginia breweries Devil's Backbone in Nellysford and Starr Hill located in Crozet. Hard cider was available from Bold Rock out of Nellysford and Foggy Ridge near Hillsville. 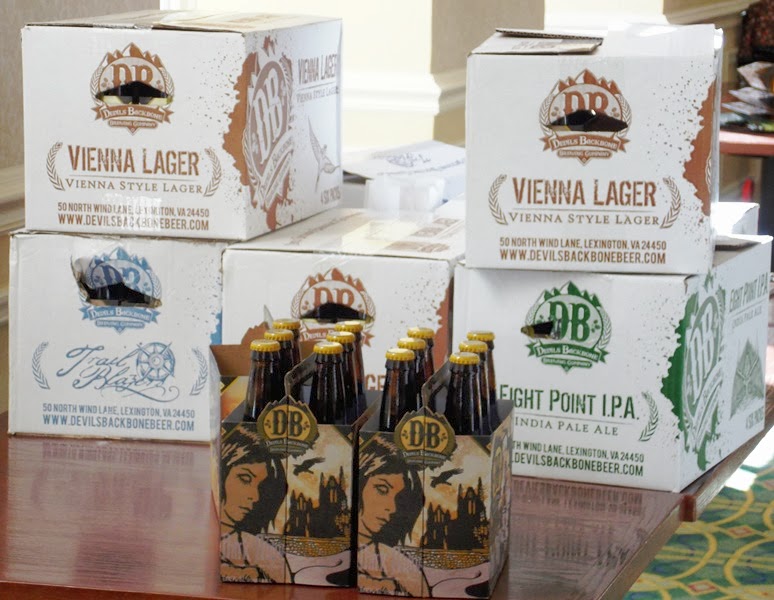 Thought not much of a hard cider drinker, Foggy Ridge's Pippin Gold was very good, described as "a unique blend of 100% Newtown Pippin hard cider and apple brandy from Laird and Company, the country's oldest distiller. Pippin Gold is delicious as a dessert cider or sweet aperitif." All five of us were pleased with the Pippin Gold. 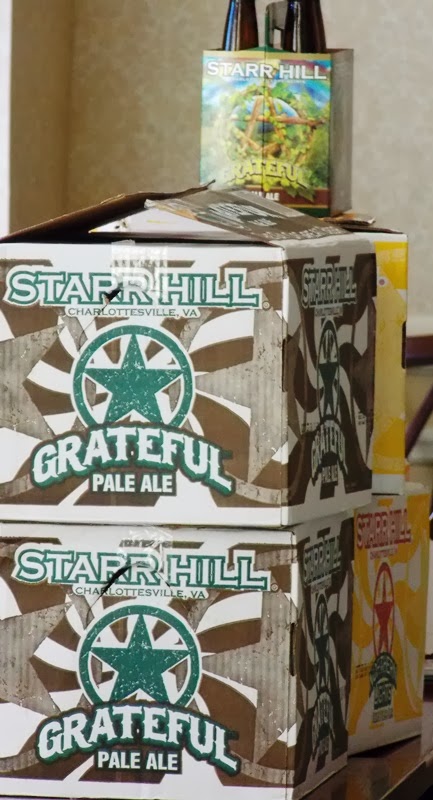 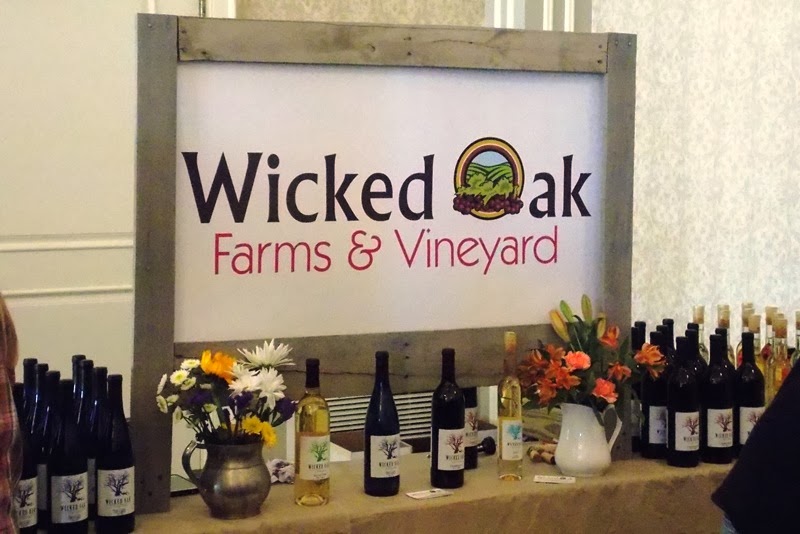 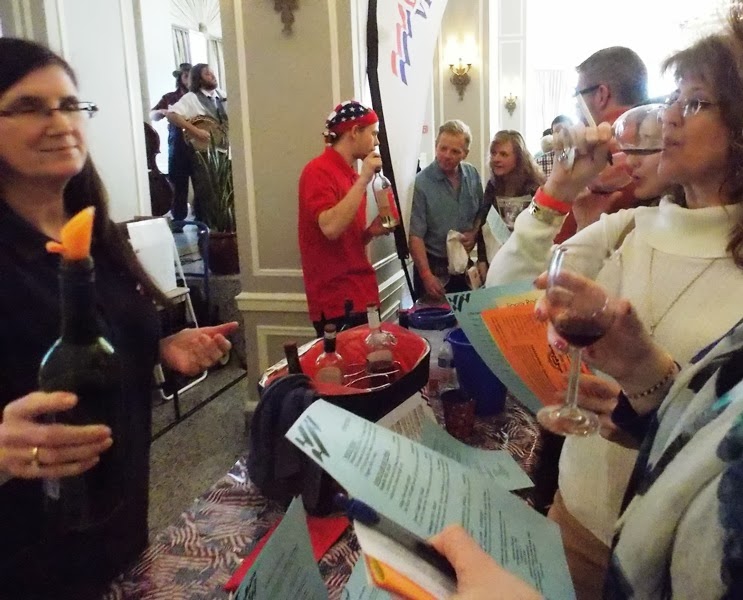 The pourers for Democracy Vineyards out of Lovingston were decked out in red, white, and blue with patriotic accents that included the table covering the wine labels. My favorite of their selections was the Republic 2012 described as "a sweet white wine with opening aromas of citrus and a tropical finish. The sweetness is balanced by a natural bright acidity." 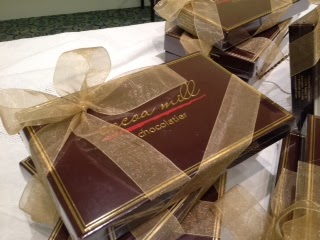 Cocoa Mill Chocolatiers had a table set up with a wide variety of their chocolates including samples. Needless to say, they were a popular spot. Located in Lexington and Staunton, I was introduced to them by Barb not long after they located on Beverley Street. It continues to be a popular stop while out and about. 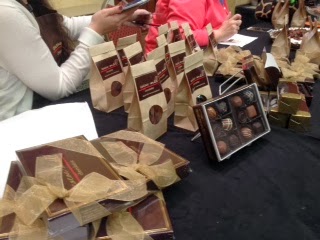 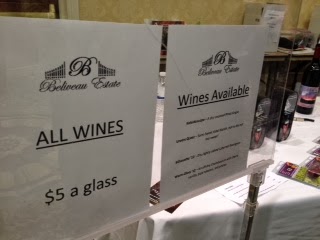 Beliveau Estate Winery outside Blacksburg has been voted 2013 Silver Best Winery by the readers of Blue Ridge Country magazine, covering the mountain regions of nine southern states. Their very luscious white wine was Lovers Quest, described as a "semi-sweet Vidal Blanc, not too dry, not too sweet." It was fabulous. 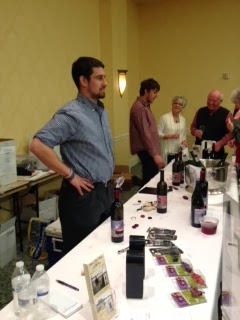 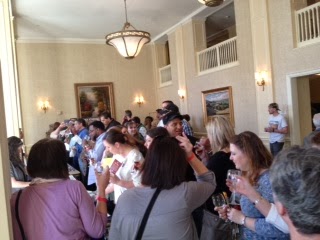 Rockbridge Vineyard located south of Staunton was offering their line of fine wines including their Tuscarora White, described as a "crisp, zingy Vidal Blanc," and their Riesling with its "slightly sweet, spicy taste." I was persuaded by my friend to try the red Meritage, a blend of Cabernet Sauvignon, Cabernet Franc, Malbec, Merlot, and Petit Verdot," but it wasn't convincing enough to convert me to a red wine lover. 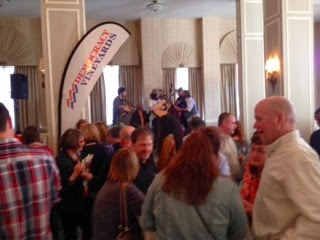 As much as I love chocolate, I discovered that Mattaponi Winery's Pow Wow, a chocolate strawberry wine, was not my cup of tea. However, their Wabamin-Niagara, described as "like eating grapes off the vine," was a nice white wine. Spotsylvania County's Mattaponi Winery, self-described as a Native-American Indian winery, specializes in award-winning berry-infused wines using flavors of blueberries, strawberries, concord grapes, and more. 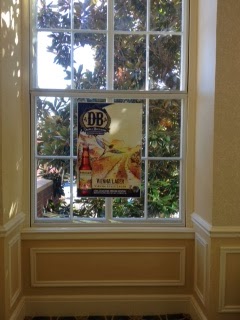 Included with the price of admission was a snack bag that included cheese and crackers, a mini loaf of French bread, and an apple. Other food offerings were available for those who wanted a bit more than a snack. Entertainment was provided by Hound Dog Hill, a bluegrass band that had feet tapping and hips swaying in one ballroom while a James Taylor-sounding musician entertained in the other.

I don't know who did the Historic Staunton Foundation's graphics but I like not only the wine glass illustration but the font used for the "Winter Wine Festival" signage. Kudos for an all-around great event.