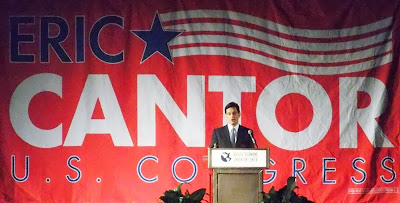 Congressman and House  Majority Leader Eric Cantor at Tuesday's annual breakfast where he hosted 1,700 attendees in an exhibition hall at the Richmond Center. The popular breakfast, a who's who of Virginia Republicans and the third largest Republican event in the Commonwealth, has grown in size over the years and will no longer fit in the ballrooms. The only two events larger are the Republican Convention and Eric Cantor's annual Republican Roundup held each fall in Henrico. 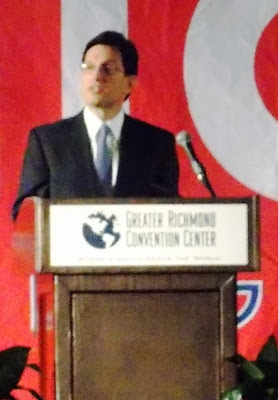 Congressman Cantor was joined by another of the GOP's Young Guns, Congressman Paul Ryan, who brought his conservative ideas to breakfast. The Congressional Young Guns -- Cantor, Ryan, and Kevin McCarthy -- came together in 2000 to help recruit and pull in new candidates and people to bring in fresh ideas. Those candidates believed in a small federal government, economic freedom, encouraging small business without additional government oversight, individual freedom -- supporting Americans as they pursue and build their dreams -- with common sense solutions to America's problems. Campaigning and working hard, 62 of their Young Gun recruits won seats in the House, flipping it to a Republican majority. 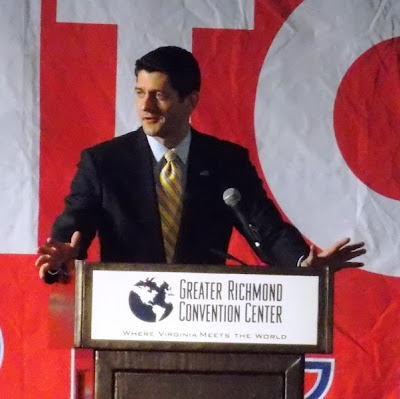 Congressman Paul Ryan, Chairman of the House Budget Committee, joked, "The 2012 election didn't go quite as we planned," to laughter from the crowd. He went on to say that Republicans cannot just be the party of "no" ... they have to be the party of new ideas and ways to implement those ideas. Republicans, he said, need to show they belong in leadership. He noted that, while Obamacare is not the answer to the nation's health woes, the GOP has an alternative that would prove to be more affordable. In a nod to the Commonwealth, Ryan said, "A Virginian gave us the Declaration of Independence ... that has made us the most free society on earth."

Ryan was complimentary of Cantor. "Eric Cantor is more than just your Congressman," he said. "He's a conservative who knows how to lead. It's easy to be a sayer ... it's harder to be a do-er. He's a do-er who can actually move our country forward. Eric Cantor is an effective conservative. He's such an effective conservative that 233 people in congress unanimously reelected him to be Majority Leader in Congress. We know his principles. He's smart and can get things done." Quite an endorsement from a fellow congressman, and quite a compliment for Virginia. 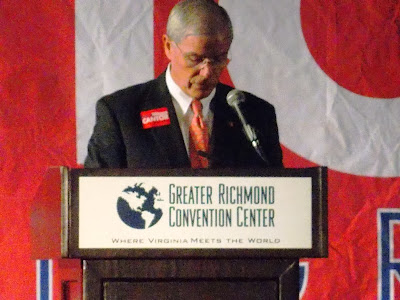 Linwood Cobb, Chairman of the 7th Congressional District, opened the event, welcomed everyone, and introduced his friend, Congressman Cantor. Linwood, one of the most successful Republican Congressional District chairmen in Virginia, is running for re-election at the 7th District Convention on May 10, 2014. I would urge those in the 7th to become a delegate to support Linwood who is a proven fund raiser, organizer, and works extremely hard for the Republican Party. He does what many cannot -- he has candidates who WIN. 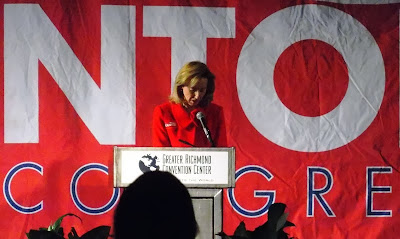 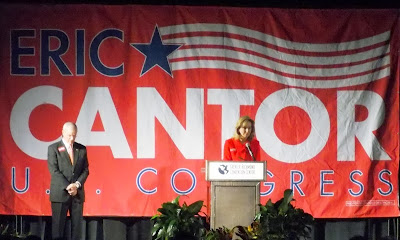 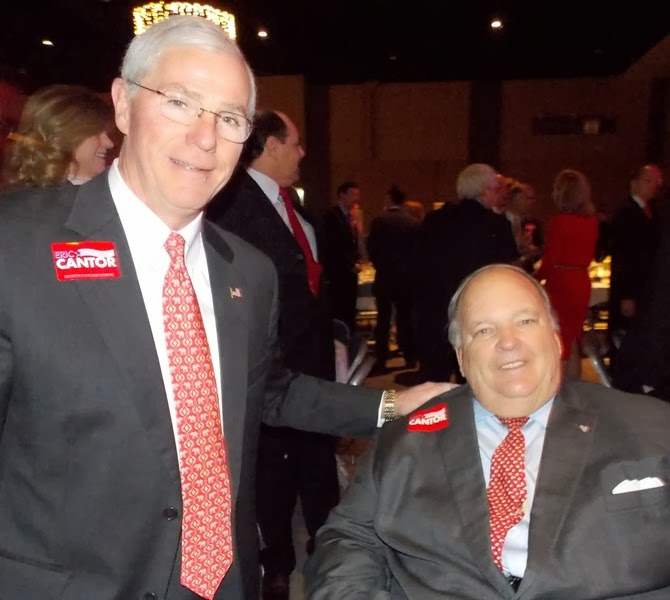 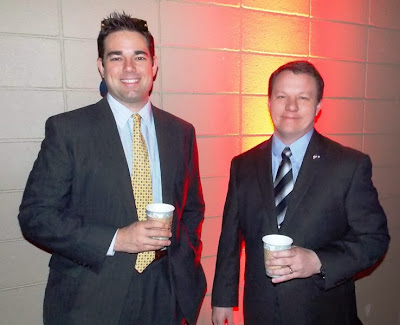 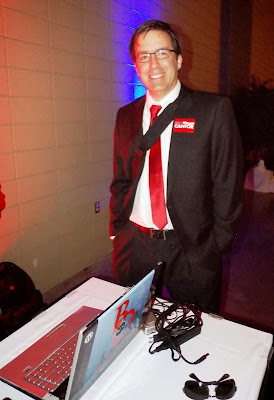 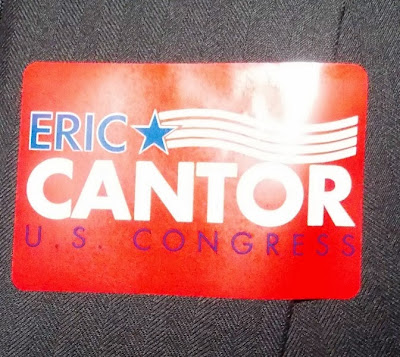 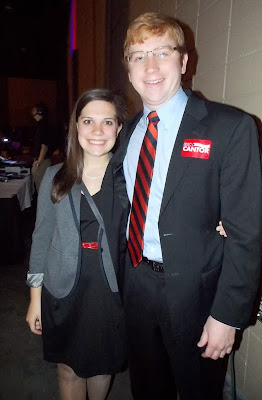 The Virginia College Republicans were there including Kelly Myers and Matt Wertman. There was also a large group of students from Henrico's Deep Run High School. 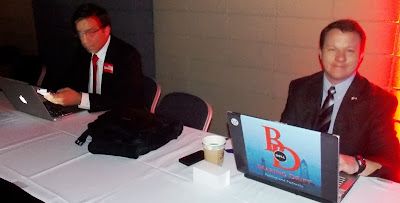 Jason and Jim hard at work. 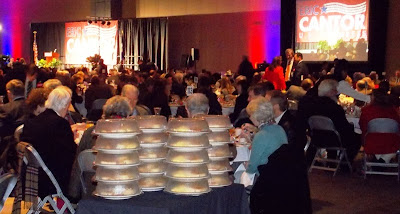 Plates of hearty breakfast foods were wheeled out while waiting for Eric Cantor and Paul Ryan to speak. 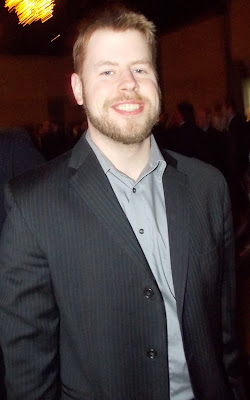 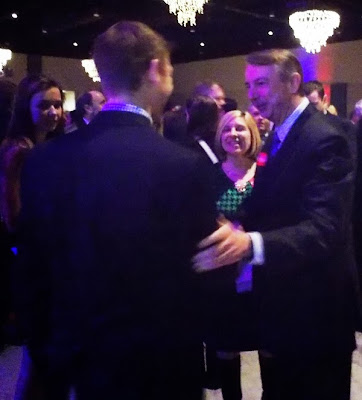 Ed Gillespie was surrounded by enthusiastic supporters after festivities wrapped up. Mr. Gillespie is running for the Republican nomination to take on U.S. Senator Mark Warner in November. 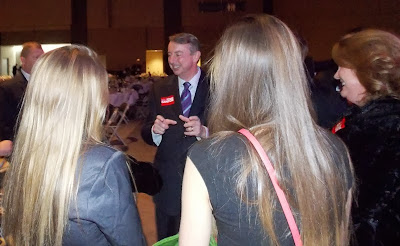 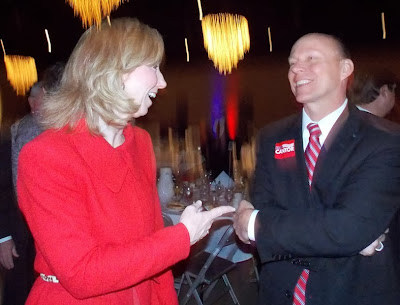 Delegate Comstock was also surrounded as she greeted those in the crowd after breakfast. 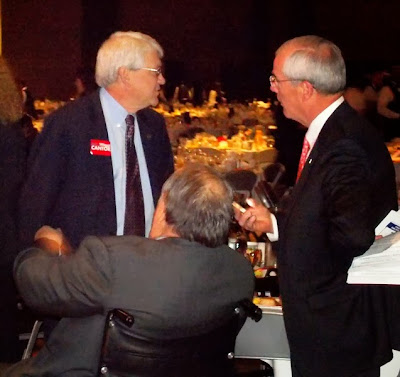 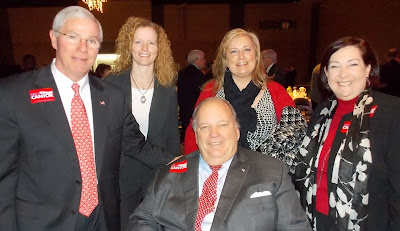 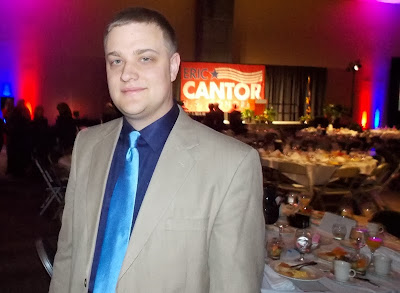 There were many familiar faces including Kristi Way, Judi Lynch, Mike Wade, Melissa Nelson, Marie Quinn, and a number of elected officials in town for the 2014 General Assembly session. More than 80 businesses sponsored tables including some of the most recognizable names in Richmond and the Commonwealth. Media was represented as well as bloggers Jason Kenney, Jim Hoeft, Flint Engleman, and myself.

More coverage can be found at:
- Lynn R. Mitchell: The Young Guns of the GOP
- Richmond Times-Dispatch: GOP must do more than oppose
- Bearing Drift: Cantor calls for Va to resist Obamacare expansion